From the moment the curtain opens, “American Idiot,” wrapping up a successful run at the Ahmanson Theatre in Los Angeles, grabs you by the throat and doesn’t let go. It’s a jaw dropping moment as the cast explode onto the dazzling set fueled with high octane and youthful exuberance singing, “don’t want to be an American idiot,” 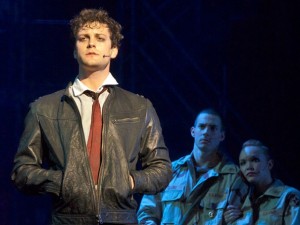 with an energy that is sustained throughout the entire production.

Based on a successful concept album by punk rock band, Green Day, the story deals with three disaffected young men, Johnny (Van Hughes), Tunny (Scott J. Campbell) and Will (Jake Epstein) who try to bail from the restraints of suburbia and head for the city to search for direction and perhaps a chance to express themselves. Maybe to make their voices heard.

The action takes place in a turbulent post 9/11 America and as we all remember, they were confusing and uncertain times.

Our characters certainly think so.  Tunny quickly grows disenchanted with the city and gravitates toward the military. Will stay home to work on his relationship with his soon to be pregnant girlfriend while Johnny dives into his new life with wild abandon, first falling in lust and later almost drowning as an addiction to heroin threatens to ruin his life.

As their individual stories unfold we are treated to episodes of passion, rage, humor more rage and sensual flying dreams, all loosely bound together by a series 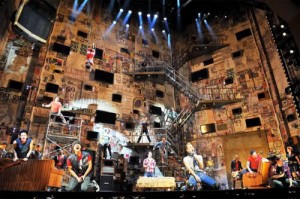 of short dispatches Johnny conveys to his mother back in the suburbs.

The music in this show is exceptional, the performers highly gifted. Every last person in the cast of twenty get their moment to shine, even the excellent band members who are on stage the entire time. But it is Van Hughes as “Johnny” who revs the engine and firmly grabs the wheels of this fast moving vehicle. His quirky, sweet, offbeat personality, even when he is high on heroin, is never short of compelling.  Sometimes you want to smack him, but mostly you want to give him a hug and say, hang in there buddy.  It’s gonna be okay.

Gabrielle McClinton as Johnny’s girl friend, “Whatsername” tries to do just that.  She is a grounding, soothing character that balances the manic Johnny’s lust for life, taming him briefly with her body and joining him in his experimentation with drugs.

Yet one of the most moving arcs is that of Tunny who returns from war a wounded soldier, both emotionally and physically. He is a boy who has grown to be a man and is finally able to find love, ending up the only 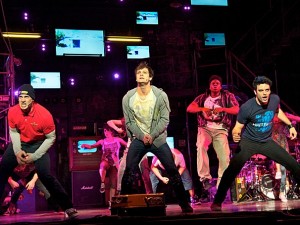 Scott J. Campbell wears his heart on his sleeve, even when he tries to be brave. Campbell’s performance is both touching and heartbreaking.

The choreography in the show is kinetic and jerky but so perfect and so much fun to watch.  I found myself saying how do they do that?  Steven Hoggett has done an excellent job here.

And then there is the aforementioned set. It is a maze of windows and doors, graffiti and flat screen televisions, playing cryptic images and messages that are woven into the fabric of the show.  It is impressive.  So are the flying sequences between Campbell and his nurse and later his love interest, a talented Nicci Claspell.

“American Idiot” truly rocks.  Not since “Hair” in the late sixties has a musical been this innovative, this fresh while still managing to touch your heart.

Directed by Michael Mayer, “American Idiot” has a few more days left in L.A. so there is still some time, though probably only a few tickets.

They do hold a lottery for a number of front row seats at a cost of only $30.00.  Get there at least an hour and a half before the show to register.   This is one “Idiot” that is well worth the effort.