The 2012 American Film Market (AFM), kicked off this morning in Santa Monica. The AFM will screen more than 420 motion pictures, including 77 world premieres and 306 market premieres, for thousands of film buyers and industry professionals from more than 70 countries.

Films making their World Premieres include: A Glimpse Inside the Mind of Charles Swan III, from writer/director Roman Coppola and starring Bill Murray, Jason Schwartzman and Charlie Sheen (Independent); The Colony, 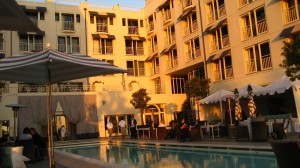 This year’s film market has shown a preference for more “name” driven, higher budget projects signaling a slight shift in power toward the independent producers of the film world.

While the zombie and horror movies that have long been the hallmark of the AFM haven’t gone away, more would-be producers of star-filled films will be working the halls of the Loew’s Hotel looking for independent financing or to secure distribution for their projects.

“There has also been an influx of buyers this year” stated Jonathan Wolf, AFM’s managing director and executive vice president of Independent Film & Television.  “We are seeing more new international buyers come to the market than in a decade,” he declared.

The country with the most new buying companies this year is South Korea (25), followed by China (13), the U.S. (11), Japan (6), Turkey (6), and Russia (5), France (4) and Italy (4). New companies attending include Snap TV from Argentina, Lume Filmes from Brazil, JY Entertainment from China and Mountain Pictures from South Korea.