A highly talented young cast burst onto the stage of the Pantages Theater last night as the National Tour of AMERICAN IDIOT invaded L.A. 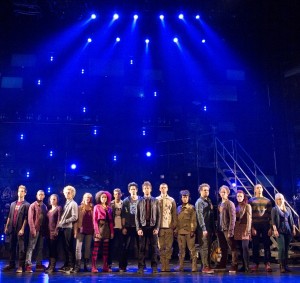 and Carson Higgins as St. Jimmy, the show opens with the blockbuster title track “American Idiot” from Green Day’s Grammy Award-winning, multi-platinum album.  Within seconds you are hooked into the infectious energy that is sustained throughout the entire performance.

The story, told partly through a series of cards and letters that are read out loud on stage, concerns three boyhood friends, two of whom escape the restraints of suburbia and head for the city to search for meaning in a shell-shocked, post 9-11 world.

Johnny soon discovers drugs that ultimately give him the confidence to embark on a sexual relationship with a girl he calls, “Whatshername.”  His guide and mentor for his volatile journey is an id like character, “St. Jimmy,” who points Johnny toward the dark side, leading ultimately to heroin addiction. 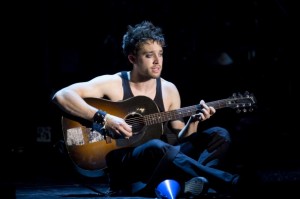 The other member of the trio, Will, stays at home, living vicariously through the letters he receives from his pals.  He and and his girlfriend are soon the parents of a child and Will’s frustration grows as he feels stifled by his surroundings.

As pedestrian as this story may sound, this show is anything but.  It takes off like a rocket and never stops.  With strong vocals, great music and choreography that might best resemble an aerobic class on speed, the stage is filled with light, sound and movement.  Even the live band on stage is brought into the action and are treated as characters in the play.

The cast is impressive.

Jared Nepute as Johnny is an edgy lovable actor whose charm and energy guides the show.  His journey from punk rocker to heroin addict and 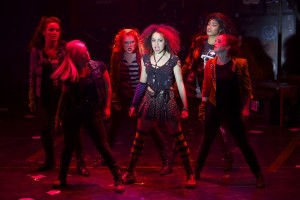 back again is a well told in Nepute’s meaningful and powerful performance.

A solid Olivia Puckett as Whatsername manages to temporarily tame the beast in Johnny, giving him momentary solace and ultimately a relationship to remember for the rest of his life.

All-American, Dan Tracy who makes his touring debut in American Idiot, is touching as Tunny, delivering an arc to his character that is perhaps the most potent and emotional in the production.

Casey O’Farrell as Will is clearly a strong talent who dominate the stage when ever his portion of the story is brought to the foreground, but it is Carson Higgins as St. Jimmy who practically steals the night.  He is a bawdy, ballsy, high octane young rocker who struts and poses to the delight of the audience. 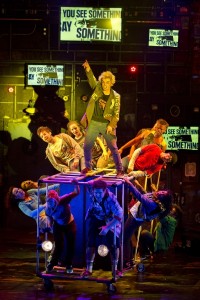 AMERICAN IDIOT’S show stopping numbers include, “Boulevard of Broken Dreams,” “21 Guns,” and “Wake Me Up When September Ends,”which brought on the second standing ovation of the night.

The imaginative set by Christine Jones is a maze of windows and doors, graffiti and flat screen televisions, playing cryptic images and messages that are woven into the fabric of the story.  It is most innovative.

Missing from last night’s performance were the high flying sequences that had been a highlight of previous productions.   Nevertheless, AMERICAN IDIOT is a heart pumping joy ride, it’s message potent and meaningful.  This Idiot will rock you and perhaps manage to put a tear in your eye.  It is not to be missed.