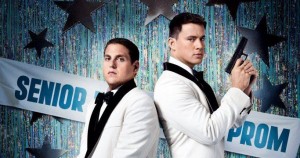 impressive $35 million Friday through Sunday.  This was the biggest opening weekend for a non-summer, non-sequel .  The comedy deals with young cops sent undercover in a high school to bust a drug ring.

“Dr. Seuss’ The Lorax” added another $22.8 million in its 3rd weekend. The Universal Pictures release continues to be the top choice for families and has now earned $158.4 million in domestic revenue.

Warner Bros’ R-rated comedy “Project X” from producer Todd Phillips in its third weekend added another $4 million. The modestly-budgeted (a reported $12 million) story of high school kids trying to build their reputations as the ultimate party hosts neared the $50 million mark this weekend.

Eddie Murphy in Paramount’s “A Thousand Words” held up reasonably well this weekend dropping just 39% in its second weekend and taking the fifth spot with $3.75 million and a 10-day total of $12.1 million.

Just outside of the top five, Relativity Media’s “Act of Valor” crossed the $60 million in its fourth weekend of release.

Lionsgate’s “The Hunger Games” should stimulate the box office in it’s much anticipated opening later this week.