Can a slacker, a young drug dealer and a free thinking hippie girl find happiness by starting a new religion in the middle of the desert?  That’s the question L.R. Gordon’s new play attempts to answer at the Rogue Machine Theatre’s Off-The-Clock World Premier presentation, “UPLOADED.”

When his dad finally cuts him off financially, Daniel (Jeff Lorch)  a 30 something layabout, goes on an angry, cocaine fueled, kinetic rant about the world and everyone in it.  As Daniel’s friend and local drug dealer, Sam 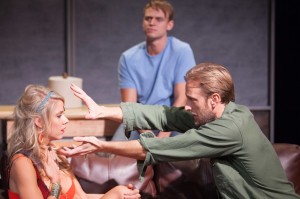 (Eric Odom) continues to help him get him wasted on a new concoction Sam calls “the screwdriver” (half cocaine, half adderall), Daniel has an epiphany.  He suddenly comes to the realization that what he really needs to do is become a prophet.  To start a new religion.  And why not?  In this world of instant fame, (no talent or experience required), Daniel is a worthy candidate.  At least in his mind.

For reasons unknown, Sam initially plays along  as Daniel fleshes out the kinks of this new religion that he is now calling “Uploading.”   Basing his “brilliant” idea on something we all have, DNA, Daniel convinces Sam to accompany him to the desert where Daniel can begin preaching his genius.

At a sleazy Grand Canyon motel a couple of days later Sam is surprised when Daniel returns with his first believer, a beautiful young woman, Anikka (Suzanne Quast).  Tattooed and open minded, she tells the lads that her wealthy father loves to invest in schemes and just might be willing to finance a new one.

This is music to Daniel’s ears.  He

and Anikka quickly become lovers and get right to work on making a baby together.  But that doesn’t keep Anikka from also flirting with Sam, letting him catch a glimpse of her naked.  Before long, Sam wants what Daniel is getting.  To do that he has to prove to Anikka that he can make a commitment–that he is willing to go along with the program.

This impromptu love triangle ultimately leads to a violent finale, one that may inadvertently see Daniel’s “Uploading” concept take a small step forward.

Actor, Jeff Lorch brings his Daniel close to the top, if not quite over it as the the new prophet in training.  Eric Odom is initially monotone and merely reactive as Sam, his purpose and intention not quite clear, but it is ultimately Sam’s character that has the biggest arc in the play, and by the end of this twisted story, Odom ably steps it up a notch from his earlier scenes.

It is Suzanne Quast as Anikka, 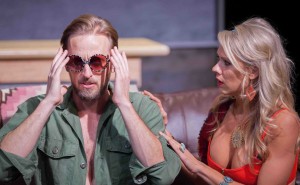 however, who manages to ground the show and raise the stakes in “Uploaded.”  She is the prize worth fighting for.  Sexy, comfortable and always in control, Quast is the center-piece of the production.

Clocking in at 75 minutes, “Uploaded” moves at a clip with Mark L. Taylor’s fast paced direction.

Performed on the set of a different play that runs at the Rogue Machine, the creatives makes good use of what is available–but it is also the imaginative image slide projections designed by Nick Santiago, as well Stephen “DJ Baba Earl” Nichols excellent sound design that further help to set the appropriate mood.

This high energy, satirical glimpse into Generation Y’s narcissistic pursuit of easy-come fame is a compelling piece of theater.  “Uploaded” is well worth the price of admission.