–PLAYWRIGHT NEIL McGOWAN HAS BEEN THERE–

You just have to put yourself out there. In order to find “the one,” it can turn into a search far and wide…perhaps to other worlds. Sounds like the perfect analogy for the artists’ journey.

Neil McGowan’s new play, “My Girlfriend is An Alien! by Keith DeFacto,” is having its world premiere in Venice, California at the award winning Pacific Resident Theatre. The company’s main stage seasons are touted for their exquisite productions of the lesser-produced classics by some of the world’s best writers. Currently, Tennessee Williams’ “The Eccentricities of a Nightingale” (Critics’ Choice – LA Times; Ovation Recommended) has just extended through September 25th. But, at the other end of the same block, on their second stage, it’s a whole different world…with aliens.

Director Guillermo Cienfuegos explained, “at first glance, perhaps you see a spoof on B Science Fiction movies. Looking deeper, you’ll discover a play about a guy who’s putting on a play to get a girl to fall in love with him – and it’s not going well. This play is about the struggle of the creative process, and being brave enough to put yourself out there, and to risk 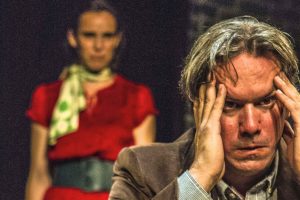 being judged. Will this guy give up and run away when things get scary, or will he take a chance and risk it all, not knowing what the outcome will be?”

Isn’t that exactly what it’s like sometimes in this town when you’re working in the business and trying to crack the code? But, this is a comedy. We caught up with writer Neil McGowan and director Guillermo Cienfuegos and got some fun and insightful perspectives on the journey of life, love, and the business of using your creative mind in Hollywood.

HR: Neil, are you into aliens or is your play a metaphor for something else? How did this piece come about and why did you choose Guillermo Cienfuegos to direct it?

Neil: Actually, the alien aspect was one of the last things to appear in my process. The play is about a writer/actor having a crisis of confidence about himself, as an artist and person, in real time during a performance of his own play. I realized that I was essentially going to have to write two plays. I knew that whatever the play-within-the-play was about should mirror, on many levels, what was happening personally to Keith DeFacto, the fictitious playwright. Themes of alienation, and not fitting in, seemed to dovetail nicely with the things that DeFacto is dealing with. It also helped to strengthen the love story that happens within the play.

My first girlfriend in high school might as well have been an alien, because my understanding of women and love in general was so unsophisticated. The result was something that was simultaneously terrifying and exciting. I would imagine falling in love with an alien at any age would be pretty similar to falling in love for the first time.

I’ve had the good fortune of working with Guillermo a few times. He directed me as an actor in a series of plays written by Keith Stevenson (who plays Keith DeFacto in “My Girlfriend is an Alien…) called “The Fried Meat Trilogy.” Guillermo is especially great with new plays, which typically need a lot more than just someone to show up and tell the actors where to stand. For this play, I really needed someone to explain to me what I had written, essentially. I knew he wouldn’t give up until the two of us, and the entire cast, solved this crazy puzzle.

HR: Guillermo, when did you become aware of “My Girlfriend is an Alien…” and what was your first impression?

Guillermo: I was a big fan of Neil’s play “Lone-Anon,” produced by Rogue Machine. I’ve always considered him to be an extremely talented and funny writer and actor, so I was happy when he asked me to direct this. I was expecting it to have an inventive, complex and unusual voice, and I was not disappointed.

HR: Why are you staging it at Pacific Resident Theatre? Aren’t they known for presenting the classics?

Neil: They have a well-earned reputation for producing classic plays, but the truth is…there is no better theater in L.A. for developing a play. Their workshop space provides a safe place for any company member to produce whatever they want, for a short run, guarded from the risk of it being reviewed. 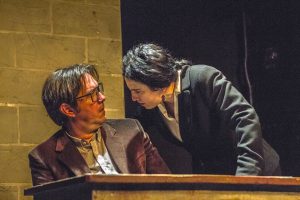 Many plays from their program have become fully realized productions, even moving to New York. I hope PRT starts getting the credit it deserves for the chances it has taken with new plays and for the opportunities that it has given to emerging playwrights in this city.

Guillermo: I consider Pacific Resident Theatre to be my home, so when it came to producing “My Girlfriend is an Alien…” it was really a no brainer.

HR: What is the most essential element to get right when you’re launching a new play? How about the most challenging?

Neil: It’s different for each play. For this piece, which attempts to do so much on a few different levels, the most challenging and essential element has been clarity. Making sure that within all of the humor, pathos and high-concept ideas, there is a through-line that is easily followed and understood. But most of all it really is a comedy, so it should be purely entertaining and have the audience walking out of the theater feeling better than when they walked in.

Guillermo: With a new play, the first thing to make sure of is that the characters and relationships are clear and that the story tracks. We work-shopped the play for some time to make sure of that – although Neil’s script was pretty strong to begin with. From a director’s POV, the first essential element is the casting. Particularly, with an unusual comedy like this – the actors need to be able to approach the scenes and events in the play in a totally real way while always embracing the comic anarchy. It takes a very good and very flexible cast, which I’m thrilled to have, across the board.

HR: Why do you think that comedy is important for telling this story?

Guillermo: I agree. I’ve never come across any material that couldn’t be deepened and improved by finding the humor in it. The main character in this case, Keith DeFacto, finds himself facing the most challenging personal and professional crises of his life, simultaneously, and it’s all happening in front of an audience. For DeFacto, these are very real and serious problems – but that’s also fertile ground for comedy. I think Neil and I have done everything we can do to tell the story of DeFacto’s struggle, while always remembering to find the funny.

HR: Your play “Lone-Anon” was made into a film, to be released next year. Do you write plays with the idea in mind to have them developed into movies?

Neil: Not at all, it’s enough of a challenge to finish a play 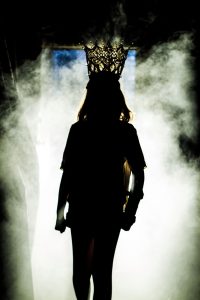 without trying to imagine it in some other medium at the same time. “Lone-Anon” becoming a movie was a bit of a fluke that I wasn’t expecting. Although, I do have to say that it was a lot of fun, adapting my own idea into something completely different. Since I tend to have a lack of ideas that really excite me enough to sit down and work on, I’ve begun thinking in terms of recycling old ideas and other things that I’ve written and perhaps developing them in other media.

HR: Why do you think audiences will enjoy this play?

Guillermo: It’s a very funny script, and we have a very funny cast, so unless you don’t like laughing I think you’re going to enjoy yourself.

Neil: I feel like it hits a sweet spot. It’s uniquely thought provoking, without being too “out there.” It touches on universal feelings of self-doubt and self-worth and being human and falling in love. It manages to talk about those things in ways that feel new, and have not been seen a thousand times before. Most of all, it is just fun and filled with joy. There’s an alien, and people in funny costumes, and some of the best actors in Los Angeles.

HR: What else are you both working on now?

Guillermo: I have another play opening this month at Rogue Machine Theatre. It’s the West Coast premiere of a racially charged cat and mouse thriller called “Dutch Masters” by Greg Keller. Slightly different fare than “My girlfriend is an Alien by Keith DeFacto.” I’ve been directing them both at the same time – one during the day and one at night – for the past couple of months. It’s been a lot of fun jumping back and forth from these two very different universes.

Neil: “Loners” (the movie version of Lone-Anon) is very nearly done with post-production. We’re looking forward to the film festivals in 2017. I have another completed play I’d like to workshop at some point, but I’d really love to dive into writing something new. Whether it’s a play or movie or whatever…but I need a good idea first.

“My Girlfriend Is An Alien! by Keith DeFacto,” written by Neil McGowan, runs on Fridays and Saturdays at 8pm, and Sundays at 3pm (added performances on Thursdays for September 1, 8, 15, and 29) through October 2, 2016 (No performance on Saturday, Sept. 10th).