The Razzie nominations were announced for 2009, and there were many bad pictures and performances to choose from.

John Wilson, Razzie president and founder, tells the L.A. Times that 2009 was such a banner year 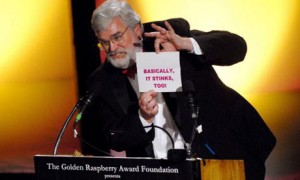 for bad movies that the Razzies considered expanding their worst-picture list to 10 nominees like the Oscars’ best-picture list, “but then I realized that our membership is only one-tenth of the academy, and it would have no meaning. It would be just like the Golden Globes, where a movie can win with only 17 votes.”

If the Razzies had expanded its top category, “Twilight: New Moon” would’ve been nominated for worst picture since it came in sixth place in the voting, so alas, it got snubbed.

WORST ACTRESS Of 2009
Beyonce, “Obsessed”
Sandra Bullock, “All About Steve”
Myley Cyrus, “Hannah Montana: The Movie”
Megan Fox, “Jennifer’s Body” and “Transformers: Revenge of the Fallen”
Sarah Jessica Parker, “Did You Hear About the Morgans?”

WORST SCREEN COUPLE OF 2009
Any Two (or More) Jonas Brothers, “The Jonas Brothers 3-D Concert Experience”
Sandra Bullock and Bradley Cooper, “All About Steve”
Will Ferrell and any co-star, Creature or “Comic Riff,” “Land of the Lost”
Shia Lebouf & Either Megan Fox or Any Transformer, “Transformers: Revenge of the Fallen”
Kristin Stewart and either Robert Pattinson or Taylor Whatz-His-Fang, “Twilight Saga: New Moon”

WORST REMAKE, RIP-OFF OR SEQUEL (COMBINED CATEGORY FOR 2009)
“G.I. Joe: The Rise of Cobra”
“Land of the Lost”
“Pink Panther 2” (A Rip-Off of a Sequel to a Remake)
“Transformers: Revenge of the Fallen”
“Twilight Saga: New Moon”