Ricky Gervais has signed on to be the host of the up-coming Golden Globe Award program. This marks the first time that the telecast has had a host since 1995.

“Not only is this the biggest 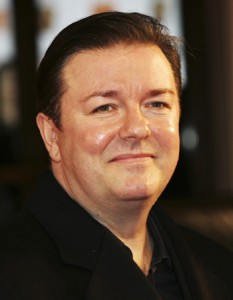 Hollywood celebration of the industry, which includes both film and TV, but also an environment where I feel I can get free reign as a host,” Gervais said Monday. “I have resisted many other offers like this, but there are just some things you don’t turn down.”

This year’s Golden Globes will be broadcast live on NBC on Jan. 17 from the Beverly Hilton Hotel starting at 8 p.m. ET.

Nominations will be announced Dec. 15.