It’s perhaps a little known fact that prior to the Civil War, black jockeys dominated the sport of horse racing. Pure Confidence by Carlyle Brown explores that world in Lower Depth Theatre Ensemble’s West Coast Premiere of a powerful and multi layered tale that explores the complicated relationship between master and slave. 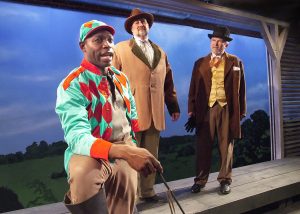 (Armond Edward Dorsey) is a cocky, confident and most winning jockey owned by two children who have inherited him. Through their lawyer, they lease Simon to Colonel Wiley Johnson (William Salyers) — a man Simon rides and wins for. The colonel’s horse is also the title of this play; Pure Confidence.

Simon and the colonel have an understanding, a friendship of sorts, and the colonel and his wife begin to think of their jockey and rented slave as a distant family member. Simon begs the colonel to buy him from the children so that he in turn can buy his own freedom with money he hopes to win by racing.

The colonel’s wife, Mattie (Deborah Puette) helps Simon put his plan in motion and even allows the Simon to buy her “girl,” Caroline (Tamarra Graham) 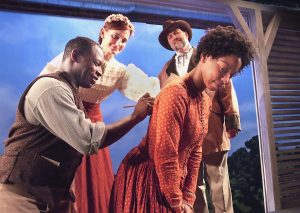 on the condition that Simon marry her. These are forward thinking, modern minded people who are certainly out of step in their class conscious, racist world.

The first act sees Simon achieve his dream. He gets his freedom, but by the second act Simon’s fortunes have changed. Injured in a racing accident, he has suffered permanent damage that prevents him from riding and now works as a bellboy for an abusive, racist hotel clerk (Eamon Hunt). His marriage to Caroline, though caring on many levels has also turned abusive. Simon vents his anger by hitting his wife.

When a newspaper reporter (Dylan John Seaton) tracks Simon 15 years later so that he can write a story about the once great jockey, we learn that it was Colonel Johnson and his wife who hired 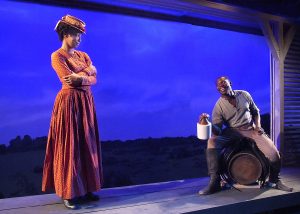 the writer to locate their former jockey.

At a touching, heart-felt reunion, these two couples, one white and powerful, the other black and struggling, try to rekindle their prior relationship in the new age of Reconstruction, but they are thwarted by the social climate, ultimately having to acknowledge that it is not a level playing field, and a legitimate friendship between them is never to be.

Staged in a black box at the Sacred Fools Theatre, this production is most impressive.  Director, Marya Mazor has crafted a poignant piece that feels as real as it is disturbing.

The set design by Tom Buderwitz and clever use of film and photo projections from Nicholas Santiago help give Pure Confidence a slick, almost off-Broadway feel. Kudos to Mylette Nora for her costume design that looks and feels so authentic. But it is the acting that makes this play well worth seeing. Armond Edward 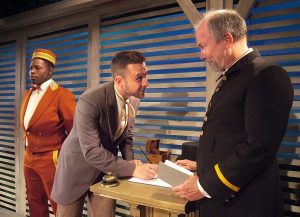 Dorsey is exceptional as the ambitious Simon. William Salyers ably unfolds Colonel’s mindset, letting us see the complexities of his character.

Tamarra Graham as “Caroline” is both sensitive and fragile, but strong when she needs to be, while Deborah Puette as the colonel’s wife convincingly portrays a modern thinking woman from a troubled time.

The rest of the cast, Eamon Hunt and Dylan John Seaton are both solid in their respective roles.

Pure Confidence is a thought provoking drama that compels as it takes us back to an ugly chapter in America’s past. Its message is not only powerful – it may also move you to tears.