Our teenage years were fragile. Many of us grew up wondering how the other half lived. At times,  we wondered whether our class mates had the same fears and insecurities we did. Were they as fragile as we sometimes felt? Did 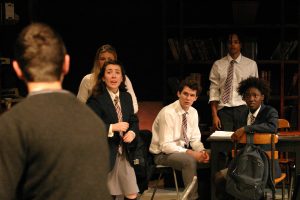 they think crazy thoughts or was their journey as easy as it looked at the time?

Tony Award winning playwright Simon Stephens attempts to answer some of these questions as he examines the life of seven British teenagers in the excellent new production, PUNK ROCK, produced by Sally Essex-Lopresti and Ron Sossi, and currently playing at the Odyssey Theatre in West L.A.

Set in an up-scale Grammar school in the north west of England, Punk Rock gives us a fly-on-the-wall experience as these bright, articulate kids, living in a privileged bubble, prepare to take their college entrance exams. 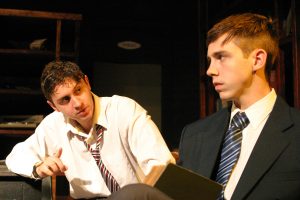 British TV series, “The In Betweeners.” He is instantly likeable and reluctantly wears his heart on his sleeve. When a new girl, Lilly (Raven Scott), transfers to the school, William develops a crush on her but is soon shattered to learn that she has been seeing and sleeping with Nicholas (Nick Marini), a handsome student who is also a part of their core group.

We also meet Cissy, (Miranda Wynne) a pretty blonde who dates Bennett (Jacob B. Gibson), a savage bully who, under the guise of being macho, may in fact be secretly unsure about his sexual preference. Bennett’s main victim at school is the brilliant young student, Chadwick, (Kenney Selvey) a kid who doesn’t bother trying to defend himself from Bennett’s verbal and physical attacks. Chadwick is caught up instead in an existential belief system where nothing really 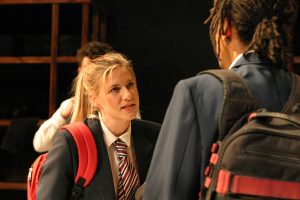 Bennett’s other target of choice is Cissy’s best friend, the somewhat chunky Tanya (Story Slaughter). Bennett berates the girl, calling her fat, and Cissy does little to stop him. By her silence, she is also complicit, as are the other kids who stand by and do almost nothing to stop him. Nobody wants to get involved.

At first, the group gossips, talks about sex, teachers, and their prospects in the outside world; but as the pressure mounts and the story begins a slow simmer, the characters amp up their anxieties, allowing their true personalities to rise to the surface. We begin to wonder who will make it through this final semester. Who will allow the truth to be revealed – who will be the one to snap and reign chaos on their 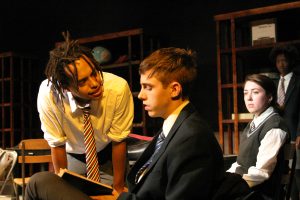 Playwright Simon Stephens examines this vulnerable age where everything seemed so important. Sexual desire is hard to control and teenage angst feels like the world is coming to an end. A look, a rejection, a slight from a friend has a deep and profound effect.

Though this production might have benefited from pushing the envelope even a little further, director Lisa James manages to keep the tension building. She plays her cast like a game of chess, moving them fluidly around the stage. She is also fortunate in that she has assembled a fine cast who expertly bring this story to life.

Zachary Grant as William is charming and enigmatic; his transformation seems tragic and real. Jacob Gibson’s Bennett feels threatening but threatened at the same time – a victim of his suppressed insecurities. Kenney Selvey is the perfect little bookworm here, 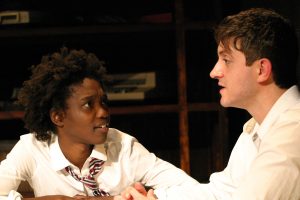 detached, intelligent, and in need of a hug.

The rest of the talented performers, Scott, Marini, Wynne, and Slaughter, as well as Mark Daneri, who makes a brief appearance as Dr. Harvey, are on the mark in their respective roles. Each actor feels real and three-dimensional. Each scene change is punctuated by loud punk rock music as a statement of their youthful rebellion.