“PEOPLE LIKE US” the new film directed by Alex Kurtzman and starring CHRIS PINE (Star Trek), ELIZABETH BANKS (Hunger Games) and MICHELLE PFEIFFER is a powerful new family drama/comedy coming out this Friday.

Inspired by true events, “People Like Us” tells the story of “Sam,” (Pine) a fast-talking salesman, whose latest deal collapses on the very day he learns 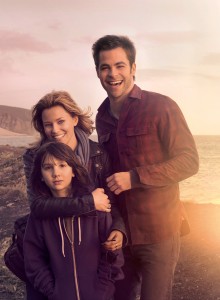 that his father has died. Against his wishes, Sam is called home to Los Angeles where he must put his father’s estate in order and reconnect with his estranged mom, (Pfeifer). In the course of fulfilling his father’s last wishes, Sam uncovers a startling secret that turns his entire world upside down: He has a 30-year-old sister, “Frankie,” (Banks) whose existence has been kept secret from him. As their relationship develops, Sam is forced to rethink everything he thought he knew about his family—and re-examine his own life choices in the process.

Pine and Banks both dig deep and are highly impressive in their roles.  In a perfect world this film would make both of them bankable stars.   Pine is the big surprise here.  He has depth and gravitas.  You feel his conflict and confusion.   Pfieffer is powerful as Pine’s mom, wearing little make up and and sporting glasses, not afraid to let flaws show.  This is one of her stronger roles in quite some time.  But it is young MICHAEL HALL D’ ADDARIO as Banks’ eleven year old son who gets the fun dialogue and manages to steal almost every scene he appears in.

“People Like Us” tugs at your heart and has you chocked up by the end of the ride.  In a summer of loud and explosive superhero films and vampire movies, not to mention the awful Adam Sandler disaster “That’s my Boy,” “People Like Us” should be this year’s “The Kids are Alright.”   The question is will the less than exciting marketing campaign designed by Dreamworks put bums in seats.   The trailer for “People Like Us” is perfunctory.  It tells too much of the story and looks too much like a Lifetime TV flick.   The poster is equally middle of the road.

Don’t let the campaign fool you. “People Like Us” has intelligence, pace, great acting and a lot of heart.  It’s the most human and so far one of the finest films of the summer.