LUKA’S ROOM HOLDS A SECRET–DON’T GIVE IT AWAY

All Luka wants is be a normal college kid–but in Rob Mersola’s excellent new play, LUKA’S ROOM, directed by Joshua Bitton, that is not quite how things work out.

After his father runs out of money due in part to a nasty divorce, 19 year old Luka is forced to transfer from Arizona State to a Valley College and move in with his eccentric Grandma Franca, a lady in the early stages of Alzheimer’s. Luka is surprised to find that his recently paroled 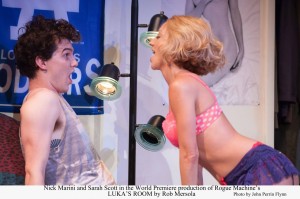 Uncle Nick, a sleaze bag who went to jail for credit card and identity theft, is also sharing the house.

Movie star handsome yet somewhat naive, Luka is a horny young lad who has yet to fully find his footing with members of the opposite sex. When one of his uncle’s acquaintances, a free spirited young blond called Angie, comes on to him, Luka is surprised to find that this little hottie is willing to jump into bed with him. But that’s exactly what happens. What Luka doesn’t realize is that this is not some random hook up. There is greed and manipulation in the air and as this sordid, dysfunctional tale unfolds, our young college student is taken for a wild ride that will more than likely change him forever.

As the weeks pass, Luka finds that his winning streak with women is unstoppable. His conquests seem way too easy. Before long he starts to think that making love with someone you care about, (in his case, Angie), trumps his many one night stands.

It would be unfair to reveal more than that because the twists in Mersola’s play are what make “Luka’s Room” so much fun. The clues are there, but do yourself a favor and don’t look too hard. Just enjoy the surprise when it comes.

not only Luka’s situation but also touches on our current state of openness.

If you think about it, we know more about our friends than any other generation in history. We have seen photos of their wives, girlfriends, kids,  pets and appendix scars. We are told about their fun times as well as their losses and humiliations. And many of us are just as willing to share our private moments too. In this Twitter, Facebook, Instagram world, our lives have become an open book–and this is the playing field on which we find ourselves in “Luka’s Room.”

Nick Marini is excellent as “Luka.” He is given a lot to work with here. A solid arc that sees him change from an innocent college boy to being hardened in more ways than one.  As the center piece of the production Marini handles his role with charm and confidence. He is a likeable young actor who should have a great future ahead of him.

Alex Fernandez as “Uncle Nick” is loud and brash as a low level yet imaginative petty criminal who seizes an opportunity no matter who gets hurt in the process. Fernandez is the source of a lot of the humor in the play and his energy helps keep the piece moving. I only wish he wouldn’t slam every door on stage with such force. 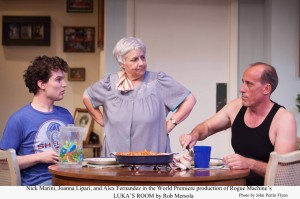 It rattled the set each and every time it happened.  It’s a small complaint but I had to say it.

Joanna Lipari as the confused F-bomb dropping “Grandma Franca” lands a few big punchlines throughout the play. It’s no easy feat keeping a pace with Alex Fernandez and Nick Marini’s banter, but Ms. Lipari goes the distance here, even giving us one jaw dropping scene that had the opening night audience howling.

Sarah Scott as “Angie” finds a nice balance between her character’s hyper-sexuality and delicate vulnerability. She has an exhilarating sense of abandon during her naughty little strip-tease performance and like Luka, she is given a satisfying arc where, in some small fashion, “Angie” is able to come to terms with herself.

The set by John Iacovelli is exceptionally detailed as is the intricate video design by Nicholas Santiago. Kudos also to Leigh Allen for Lighting Design and to Michele Young for her costumes.

“Luka’s Room” is a compelling production that takes an episodic approach to a timely subject. With it’s talented cast who deliver spot-on performances, it is edgy theater that definitely should not be missed.

When: 8pm Fridays and Saturdays, 3pm on Sundays through September 20, 2015
(No Performance on Saturday, August 22nd)