Ms. Bacall was only 19 years old when she starred with the Humphrey Bogart in the 1944 movie “To Have and Have Not,” director Howard 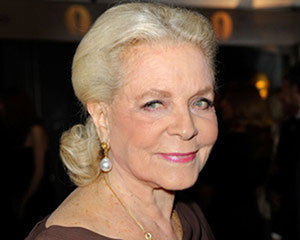 Hawks’ film adaptation of Ernest Hemingway‘s novel. She would go on to marry her much older co-star and they began one of Hollywood’s most famed personal and professional partnerships.

Bacall and Bogart married in 1945 and were together until his death in 1957.

In 2009, she was selected by the Academy of Motion Picture Arts and Sciences to receive an Academy Honorary Award, “in recognition of her central place in the Golden Age of motion pictures.”

Her performance in the film, “The Mirror Has Two Faces” (1996) earned her a Golden Globe Award and an Academy Award nomination.