One of the most violent movies in recent history is also one of the most fun with a star turn by young Brit, Aaron Johnson as the wetsuit wearing, love struck superhero wanna-be, Kick Ass.

Directed by Matthew Vaughn for a mere 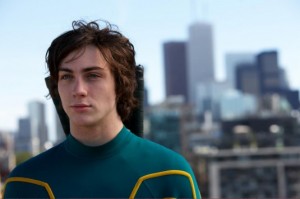 reported $30 million, “Kick Ass” is both funny and serious, charming and deadly, bloody and a sexy coming-of-age film all rolled into one.

Nick Cage is back to form as ex cop turned crusader, Big Daddy, and Chloe Moretz as his daughter and fellow crime fighter, Hit-Girl, both turn in stellar performances.

Christopher Mintz-Plasse as Red Mist and Mark Strong as his ruthless father are fine additions to a talented cast of mostly unknowns.

“Kick Ass” is the best new entry in the cinema sweepstakes so far this year. Don’t miss it.