GOING CLEAR is an HBO documentary directed by Alex Gibney that was given a limited theatrical release and aired on HBO March 29 2015. The documentary is based on the 2013 book ‘Going Clear: Scientology, Hollywood and Prison of Belief’ written by Lawrence Wright.

This documentary tells the history 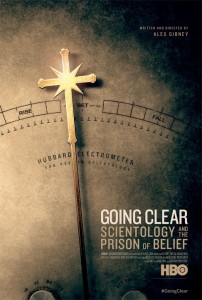 of the religion we know as Scientology. From the beginnings of L. Ron Hubbard to where it is now with its leader, Chairman of the Board of Religious Technology center David Micavige. The doc features many archive footage/interviews of Hubbard, Hollywood celebrity current members, The of Church’s ceremonies and testimonies from journalist, the author of the book which the doc is based on and even former members.

The information of this documentary was presented in a very compelling matter that didn’t feel like you were being berated by overwhelming knowledge. The director held your hand as evidence of the church’s doing was displayed from an outside perspective and help from former members that were on the low and high level of the organization.

Now we got the formalities done, let’s REALLY talk about the doc. Ho-ly shit. I cannot believe these people think that Scientology is a legit religion. I get with the history of other religions the same argument can be made, but come on. This documentary points out that his religion was seen as a possible scam to avoid tax evasion from the IRS by its creator, L. Ron Hubbard.

Truthfully, I really don’t want to spoil too much about the documentary. So this will mainly be a reaction piece. As I said early, this doc gives the history of the church but goes a bit further than that. With the help of former members like writer and filmmaker Paul Haggis (member for 35 years), 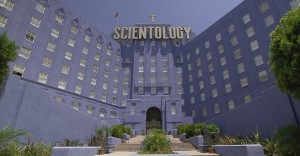 Mike Rinder former head of the church’s Office of Special Affairs (member for 25 years), written words from Hubbard’s wife Sara Northup and many more, my jaw was dropped to the floor.

So much shit that I thought I knew about the church paled in comparison what was in this documentary. From their belief system, smear campaign on people against the church, tax evasion, abuse of power from past and present to the church going toe to toe with the IRS to be classified as an actual religion. This two hour examination into this world is something that should be seen from anyone who wants to study the world of cults.

My only gripe with it is that it didn’t touch up on a couple of stories about the church. One being the disappearance of David Micavige wife, Michele and the two ‘missing persons’ report filed on her. It’s understandable as her disappearance is more speculated on and not concrete evidence but, boy that wouldn’t raised even more

All in all, I think this documentary was executed very well and should be viewed by anyone with an interest into the religion. But then again, anybody who gets into any religion should take a hard look at it and themselves and think, “Is this really for me?”