Four geeks locked away playing video games in a basement are ready to fight for survival when they discover that the Zombie Apocalypse has begun. Armed with only baseball bats and a vast and extensive knowledge of every zombie film ever made, the geeks know exactly what works and what doesn’t when it comes to killing the undead. With little time to waste they plot their escape, hit Costco for supplies, hide out in a fort, kill a few dozen zombies and strengthening their friendships in the process.

Written by James Kopp and David Rock, “GEEKS vs ZOMBIES” began it’s theatrical life in Bakersfield where it enjoyed a successful run 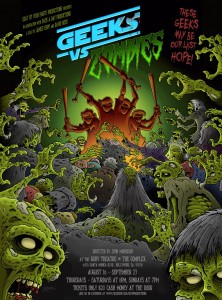 Intent on bringing the play to Los Angeles, the writers approached Roger Mathey, the prolific director of the 2002 hit play, “Trainspotting” and asked him to help produce an L.A. version. Mathey signed on and once again brought back director John Morrison, who co-directed the Bakersfield run along with Kopp.

Mathey and Morrison don’t disappoint. The play is a rousing, fast paced, funny couple of hours that had the audience cheering every action scene, of which there are plenty. Boasting two large casts that alternate on different nights, there is a lot of traffic on the small stage at the Ruby, yet the well thought out direction makes it all flow effortlessly.

Our Geeks, “Macready,” “Blair,” “Loomis” and “Wallace” are a media savvy bunch. They know everything about fanboy culture, have opinions on music, video games and movies, including the yet to be released Brad Pitt zombie film “World War Z”. They have studied “Shaun of the Dead,” “28 Days Later” and “The Night of the Living Dead.”  These Geeks love “Star Wars” films but hate the 2008 flop, “The Spirit.” Rightly so.

Just in-case the earth and all it’s treasures are destroyed, our Geeks feel it their responsibility to make a list of the best and worst of mankind, highlighting their

Geeks they may be, but our lads also boast a healthy supply of testosterone. There are several minor romantic plots woven into the story-line. While these never overshadow the gritty action scenes, they do manage to provide extra laughs.

The play also touches on a philosophical argument for and against free will vs god’s will as well as a metaphoric comparison to world events.

It is perhaps no accident that this Zombie Apocalypse started in the Middle East.

Despite it’s flirtation with serious issues (there is even an appearance by “God,”) “Geeks vs Zombies” knows its audience and fully understands what they want. Fun, raunchy dialogue and gore. Thus the play doesn’t linger too long on religion or politics, 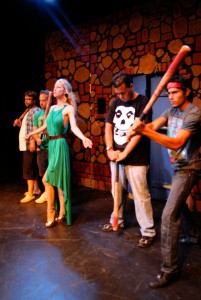 or even on women, concentrating on punch lines, and fight scenes. Oh, and did I mention blood? Yes, there is plenty of that.

The ten actors playing zombies look the part in both makeup and movements. The program states that several of them are hearing impaired.

Lighting and set design are competent though the fine (uncredited) musical score that punctuates the action sometimes over powered the dialogue on stage the night of this review.

All in all, “Geeks vs Zombies” is delicious theatrical experience.  Like “Mcready” says, “hang out with more geeks. Maybe you’ll learn something.”