Those are the lyrics to a brilliant song from the 60s rock musical, HAIR. that kept running through my brain after seeing Mike Bartlett’s disturbing play, BULL, currently making it’s West Coast Premiere at the Met Theatre in Los Angeles.

A Rogue Machine production, opening in the Hollywood Fringe Festival and running beyond, BULL is a great example of something that is becoming quite common in the new millennium, especially on the internet. Haters who skewer people for no particular reason other than the fact they exist. Or perhaps because they hold an opinion that the hater doesn’t agree with. As we’ve come to learn, there’s a lot of hate out there and it rears it’s ugly head in many shapes and forms, some subtle and others deadly, like the brutal massacre in Orlando this past weekend.

The haters in BULL 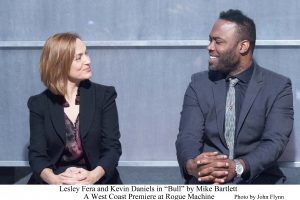 are of the more subtle variety. Isobel (Lesley Fera) and Tony (Kevin Daniels) are a couple of ambitious corporate types who, along with co-worker Thomas, (Joshua Britton) are waiting to meet with their boss, Carter (Alex Whittington) to learn which one of them may lose their job due to corporate downsizing.

It is clear from the get go that Thomas is being set up as the fall guy here. He is an affable guy, a young man who tries hard but seems not to fit in.

It all starts out playfully.

“You have something in your hair,” Isabel tells Thomas. “Hmm. Is that the suit you’re going to wear” she asks. Little jabs and barbs to unnerve him. Thomas tries to deflect her insults but once their co-worker Tony shows up the jabs turn downright ugly and just when you think it can’t get any worse, (surely Thomas will turn the tables on these two creeps), boss man Carter arrives and he too quickly joins the wolf pack.

As the humiliation escalates we learn that Isabel has even more up her sleeve. She has dirt on Thomas. She knows of his lonely existence, about his failed relationship and she uses that information 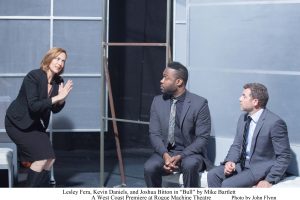 for maximum effect. This nasty piece of work will settle for nothing short of total decimation.

As the story unfolds we keep hoping for redemption. That Thomas will walk away from the ugliness with some dignity but, as in life, bad things happen to good people.

The question is why? What do these two aggressive Alphas want from Thomas? Is this about the survival of the fittest, or is writer, Mike Bartlett questioning our complacency?  To ask how many times we’ve turned our back on bullying. Are we victims or are we perpetrators? Like Bartlett’s previous work, COCK, this play is sharp, smart, uncomfortable and thought provoking.

The material of course wouldn’t work without an exceptional cast and the actors here shine. Lesley Fera is deliciously nasty, Joshua Britton is pathetically convincing, Kevin Daniels is perfectly manipulative while Alex Whittington is without question the boss with his head up his ass. Not sure who’s a Brit and who isn’t in among the actors but there were no slip ups. The English accents elevated the material, kept it dry in that wry British way, making it even more effective.

Director, Jennifer Pollono has the play moving at a clip. It clocks in at a mere 50 minutes. But what an intense 50 minutes. BULL is a full throttle assault that made me want to see more.

The MET Theatre, 1089 N. Oxford Avenue, Los Angeles. Street parking or lot at the Medical Center about a block and a half East of the theater (past the freeway) for $6.

(“Easy To Be Hard” Lyrics by James Rado and Gerome Ragni)