An unhappily married couple and their lay-about friend engage in a power struggle over commitment and motivation in the world premier of “The Gun” by JUSTIN YOFFE now playing at the Ruskin Group Theatre in Santa Monica.

“Steve” (JOSH DRENNEN) is a troubled actor unable to climb out of his soul crushing rut. His friend, “Mike” (JOHN COLELLA) seems to take pleasure in reminding Steve 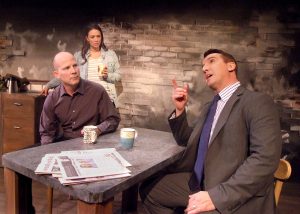 that his career is in the dumps, that his life is going nowhere. An in your face, cocky know it all; Mike’s life appears to be no picnic either. His marriage to his fragile wife, “Ellen” (AUSTIN HIGHSMITH GARCES) is shaky at best. Ellen is completely under his thumb and Mike doesn’t comprehend just how demoralizing his tone is when he talks to her. Mike is a nasty piece of work and Steven and Ellen have both just about had it with him.

After blowing a promising Broadway audition, Steve storms out of the casting director’s office feeling even more of a failure. Finding himself in an alley he discovers an abandoned hand gun in a garbage can. A homeless man, (HAMILTON MATTHEWS) tells Steve he saw someone dump it there. 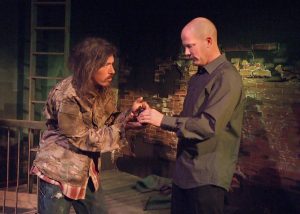 Unfazed, Mike keeps the gun and suddenly feels empowered. Is this the catalyst he needs to step up to the plate? To rise to the occasion and realize his potential?

Returning to Mike’s apartment with the weapon in his waistband,  Steve confronts Ellen. He questions her and Mike’s relationship and tells her he sees the way her husband treats her. Knows how unhappy she must be.

Ellen opens up to Steve and when Mike returns from work he finds his friend and his wife in an embrace. Confused and feeling threatened, he confronts Steve. What starts out as a verbal challenge soon turns nasty and physical. Mike is revealed to be even more messed up then Steve. He eventually gets a hold of the gun and from here the play rapidly spirals toward its climactic conclusion. 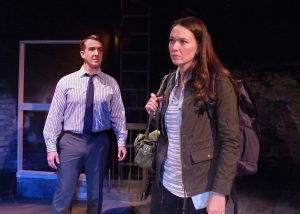 Josh Drennen commands the stage as the troubled “Steve.” John Colella is suitably overbearing and delivers a nuanced performance as Steve’s best friend. Austin Highsmith Garces is suitably empathetic as “Ellen,” her character’s turmoil as sad as it is relatable.

Using the unconventional stage at the Ruskin Theatre to her advantage, set designer, HILLARY BAUMAN, smoothly transitions the story between it’s various setting.  Composer, HANNAH FLOREK, helps create just the right mood with her fine score, while Director, DAVE FLOREK, keeps the the tension of The Gun wound tight, presenting a compelling psychodrama that is tough, to the point and ultimately well worth the price of admission.