David Glasser, COO at the Weinstein Company put it clearly at the Future of Film Summit in Hollywood this week, “set success by profit, not box-office”. Along with his fellow Chief Officers from the mini-majors attending this executive studded summit, Glasser was struggling to get his head around the changing dynamics of the movie industry. 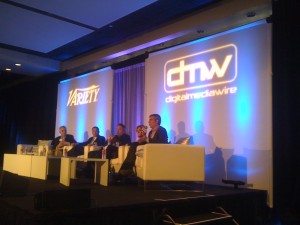 given of the changing world of the silver screen – twenty-five year old males and their juniors wont go to the movie theater! “My 16 year old son doesn’t go to the movies,” declared Christa Thomas, a film finance banker with SunTrust, “…he goes down to the family-room, to the big screen, and games and facebooks with his friends all week-end.” Thomas at the same time is telling the attendees that another new trend in the industry is that the banks have pretty much given up on financing movies.

Not only is money and twenty-five and under males hard to find, but it appears audiences in general are trending towards stay at home to watch movies, if indeed they actually are watching movies and not surfing the net and gaming. “We made a bowling movie and it stiffed,” explains Rick Nicita, COO at Morgan Creek. A friend had told him that twenty million Americans go bowling every Friday night. “So we made a bowling movie and we opened at the week-end… and no one came. So I called him on Monday and told him, twenty million Americans went BOWLING this Friday!”

“Know your downside,” advised Jin Stein, of Endgame Entertainment. If you’re going to make a movie in today’s changing landscape you’ve got to approach it as a business. Ryan Kavanaugh, CEO of Relativity Media, is clear how to go about things, “Analyze!” he tells the attendees. “At Morgan Creek we look at what’s-the-worst the movie can do,” he explains. He uses a plump data-base of figures on all the movies and all the money they cost, made or lost, to look at comps. He matches genre, audience demographics, release dates, and any other measurable and sees what the averages were. “It’s a tool, if it says 90% of the movies lost money then no. But even if it says 100% made money does not mean we’ll make it.” Kavanaugh was determined the attendees got the idea, “If it turns out a piece of s**t what does it do to us!” Then he added, “…if we’ll break even we’ll go ahead.”

The cold, objective realities of making movies in the second decade of the Twenty-First century it appears reduces filmmaking to a business. No one is going to take chances. Keep exposure down, max production value while saving on production costs, don’t burn investors, make it a win-win for everyone and keep them in town. Release digitally, market wisely and strategically, and remember, as if anyone might have forgotten, have a compelling, engaging story.