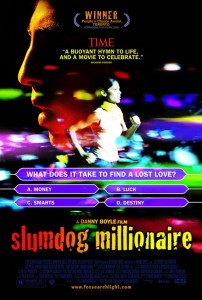 Academy Awards loom, an negative undercurrent has been brewing against front-runner, Slumdog Millionaire. A lawsuit in India against members of the production, and now rumors that the children in the film were mistreated and underpaid. Other conspiracy theories abound.

The L.A. Times’ Pete Hammond reports on the damning allegations that are being hurled against the movie. The filmmakers are not just sitting back, dodging bullets. They are fighting mad.

Boyle and Colson said the kids were enrolled in school for the first time after filming, and a fund had been set up to cover their education, as well as their basic living costs, health care and any emergencies. If the children stay in school until they are 18, they will receive another lump sum.

“Since putting these arrangements in place more than 12 months ago, we have never sought to publicize them, and we are doing so now only in response to the questions raised by the press,” Colson and Boyle’s statement said.

To read the FULL STORY from the L.A. Times, cut and paste this link:http://latimesblogs.latimes.com/season/2009/01/the-conspiracy.html