Friends of The Fairfax Theater, threw an 80th birthday party on Saturday, March 27th to draw attention to the recent closing of the Art Deco landmark on Beverly Boulevard. Built in 1929, the theater now faces a threat to

its existence by developers who are proposing that the Fairfax and some adjacent shops be turned into a 71-unit condominium complex over retail space and subterranean parking.

The announcement and forced closing has ignited community condemnation and protest. 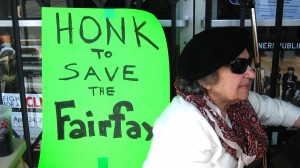 one of the few remaining neighborhood movie houses left in L.A., let alone the country,  the Fairfax has to be saved,” said one protester Saturday afternoon.

The Los Angeles Historic Theatre Foundation agree.  They will be at City Hall on April 1st at 10:00 a.m. to try and get the building 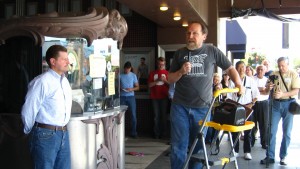 officially declared a Los Angeles Landmark.  The Foundation was out in force on Saturday to inform celebrants and the neighborhood of the positive economic impact that thousands of movie goers can draw to the neighborhood each week.  “We have just begun to fight” they declared.

“We can’t let this 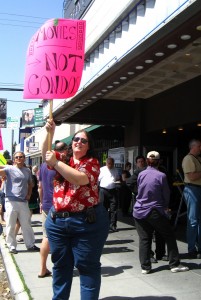 beautiful venue be turned into another ugly apartment building” said a member of the Foundation. 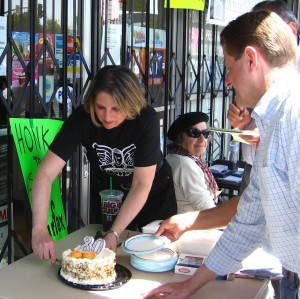 The honking of horns in support of the protest continued almost non stop for over an hour.