Privacy concerns over so-called “nude” airport security scanners have again been raised after a website published 100 scans of passengers. 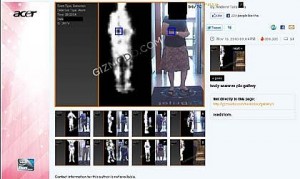 The scans were sourced from a courthouse in Orlando, Florida, where, Gizmodo reported, US marshals had improperly stored the images.

US authorities have repeatedly assured the passengers that body scans could not be stored and would therefore never be made public.

Meanwhile, An American cancer survivor says she was asked to remove her prosthetic breast and show it to airport security during an “enhanced” pat-down, a report on North Carolina television said on Friday.

Cathy Bossi, a flight attendant for three decades, told WBTV television in Charlotte, North Carolina, that she was selected by a Transportation Security Administration (TSA) agent to go through a full-body scanner, and then was sent to be patted down.

Passengers and airline crew members are being randomly selected to pass through new scanners being deployed at airports as part of stepped-up security measures.

They are supposed to be given an “enhanced” pat-down, which includes a frisk of their private parts, if they refuse to go through the X-ray machines or if the scanner shows something suspicious.

Bossi said the TSA agent who patted her down “put her full hand on my breast and said, ‘What’s this?’  “I said, ‘It’s a prosthesis because I have breast cancer.’ And she said, ‘Well, you’ll have to show me that,'” Bossi said.