Madonna popped in — via satellite — on The Ellen DeGeneres Show last week. The topic: bullying.

“I’m incredibly disturbed and saddened by the overwhelming number of teen suicides that have been reported lately because of bullying,” says Madonna, adding that she felt like she had to say something. “The gay community has been incredibly supportive of me. I wouldn’t have a career if it weren’t for the gay community.”

Madonna said she “can totally 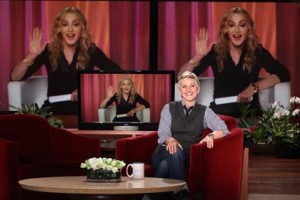 relate to the idea of feeling isolated and alienated. I was incredibly lonely as a child, as a teenager. I have to say I never felt like I fit in in school. I wasn’t a jock. I wasn’t an intellectual. There was no group that I felt a part of. I just felt like a weirdo.”

Her gay ballet teacher took her under his wing and introduced her to a “community of artists of other unique individuals who told me it was good and OK to be different, and brought me to my first gay disco, and ironically made me feel I was part of the world and it was OK to be different.”

The singer says she talks to her kids about “not judging people who are different.” She got riled up, saying, “The concept that we are torturing teenagers because they are gay. It’s kind of like I said earlier. It’s unfathomable. It’s like lynching black people or Hitler exterminating Jews. Sorry if I’m going on a rampage right now, but this is America. The land of the free and the home of the brave.”

Her solution, she says, would be for everyone to try to get through each day “without gossiping” about anybody. “And not only that. Not even listening to gossip. Walking away from it. Can you imagine what your day would be like?”