The Consulate General of Japan in Los Angeles hosted a screening and a reception for the American short film, ‘The 8th Samurai’ on Thursday night in Hancock Park. 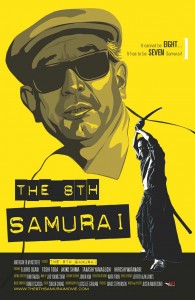 Justin Ambrosino, ‘The 8th Samurai’ is partially an homage to the legendary director, Akira Kurosawa. The film is shot in the Japanese language and uses an entirely Japanese cast.

During the Q&A after the screening, Ambrosino spoke of how the inspiration for the film came in part from his off-the-cuff comment wondering what the famous Kurosawa film might have been like with an 8th samurai.  With that he put the thought away, focusing on the AFI thesis he had been working on and fully expected to put into production.  His thesis project however was not green-lit by the AFI faculty.  Shocked and surprised, Ambrasino remembered his samurai concept, and after a brief melt-down, he delivered the samurai script to AFI in a week.  This time his project was green-lit and ‘The Eight Samurai’ has gone on to play at over 35 film festivals, earning 10 awards.

After winning Best of Fest at LA Shorts Fest ’09, ‘The 8th Samurai’ has become eligible for an Academy Awards nomination in the Live Action Short Movie category. The film has also found distribution in Japan through Rational Entertainment.