Hollywood has rolled out the red carpet, the Bushmills and the Guinness at the opening night of the 4th Annual Irish Film Festival. Guests flew in from Ireland and rolled down the Hollywood Hills to the Academy’s Linwood Dunn Theater to 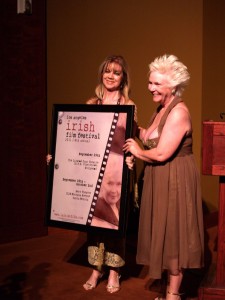 acknowledge the exceptional contribution the Irish have made to the magic of the silver screen.

Topping the billing was the Tribute to Fionnula Flanagan. Fionnula stars along side Brendan Gleeson in The Guard. Her performance is certainly to get serious nods for Best Supporting role in the upcoming award season.

The international line-up of guests touted their Irishness with the baloney of Blarney. Pavlina Moskalykova, a Czech filmmaker, was clear what draws her to the Irish, “…their sense of humor!”

The festival runs through to Sunday October 2nd.