Ben Forkner of Film 360 has it all, a studio first look deal and a stable of actors and writers that would give TMZ a good week of back-to-back material. So how good is it for him? That’s one of the questions raised at the Future of Film Summit held at the trendy Sofitel Hotel in Los Angeles this week.

First thing Ben should remind himself of every morning before brushing his teeth is that he’s in a small and elite club. Most producers do not have the luxury of a studio picking up a share of their overhead and get behind their project – assuming 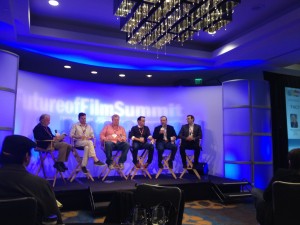 they don’t pass on it! Since 2000 the number of these deals has diminished alarmingly and the terms are not as sweet as they once were.

So what do studios want in return? Story driven, tent-pole movies that have strong international and domestic appeal… and if possible are the stuff of franchise. And that’s good news for writers. “The value of top writers has skyrocketed,” Ben declares. “Writers are now able to create a brand for themselves,” agreed J C Spink, “they were so passed over for a hundred years out here!”

So how’s the new digital landscape changing things? “As emerging platforms take shape you’ll see some changes”, Paul Green suggests. “But for the moment it’s steady as she goes,” he adds, but, “If digital distribution takes off, and Hulu and NetFlix start having first-look deals then things are going to change.”

J C Spink sees studios as being more savvy in the projects they go after. “Studios have a much better game plan, more sure of themselves,” he explained. As an example he pointed out that the dwindling return on DVD sales has hit the comedy market badly. Smaller budgets are now the norm for a genre that once demanded near action movie like coin.

Paul Green believes that the material and architecture of all movies, inside and outside the studio system is fundamentally the same, bankable players, soft money, foreign sales… oh! And a good story!

Where do you get that good story? J C Spink explained that that’s the hardest of all. “I read one hundred Nicholl’s scripts over a six week period and I found fifteen that might be worth a second look.” When asked what those fifteen looked like he said, “ten were good writers and five were good concepts.” But I guess zero were good writers with good concepts!