ENTERTAINMENT, POLITICS AND OUR GUN CULTURE

Violence has been present and popular in films since the movie industry began. It attracts audiences, but does it influence audiences to act more aggressively? In this election year politics brings many questions to the surface, including our gun laws.

CHURCH & STATE playwright Jason Odell Williams doesn’t think that film or television is solely to blame for our current gun culture. His latest work examines the way politics touches on subjects like this and influences elections. The play has been chosen by the National New Playwright Network to make its rolling World Premiere at the Skylight Theatre this summer, spotlighting the company’s knack for “in-the-moment-theatre,” developed to reflect current culture and the issues of our time. Wherever you stand on gun laws, however we look at these issues, it seems clear that the conversation is not over. Especially in a year filled with violence.

HR: Where does your story start?

Williams: It begins three days before a U.S. Senator’s bid for reelection in North Carolina. After a school shooting he makes an off-the-cuff comment about God, calling into question his previously stated beliefs. As his campaign manager and support camp try desperately to contain the damage, things turn in an unexpected direction.

HR: CHURCH & STATE is getting lots of attention for its rather uncanny “plucked from the headlines” focus on the politics of gun control. Ironically, the automatic weapon mentioned in your play was the same model used in the Orlando massacre. Had you hoped to draw attention to the gun violence issue when you wrote it?

Williams: It’s very sad how timely the play is right now, but it was timely when I first started writing it 3 years ago, and timely when I had the beginning of the idea almost 10 years ago. So while it may seem as if it was plucked from our current headlines, it actually began for me after the shooting massacre at Virginia Tech in 2007. I went to UVA, so the images on TV of candlelight vigils by my Cavaliers for our rival Hookies touched me profoundly. Then Tucson happened, and I watched the news, riveted and angry. Then Aurora. And I watched again, riveted and angry. Then Newtown. And I’d had enough. A month later, in January 2013, I had a first draft of what would eventually become Church & State. 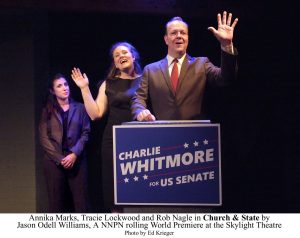 HR: Why is this such a meaningful subject for you?

Williams: I don’t know. The issue of guns in America just strikes  a chord with me. Perhaps it’s because while it can make us feel helpless at times, I also feel like something can actually be done about it, if only we as a country had the courage to take action. So I support causes like Everytown.org and SandyHookPromise.org. But I also took action by writing this play. It felt like it was the only thing I could do, the only thing I could control.

The AR-15 was the gun used at Sandy Hook, which is why it’s the one mentioned in the play. And of course later it became the gun used in San Bernardino and Orlando and many others. It’s nicknamed “America’s gun” for a reason. It’s easy to buy, easy to use, and easy to shoot a lot of bullets in a short amount of time. 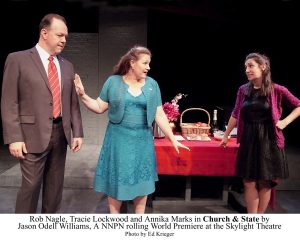 HR: What do you hope to achieve with this play?

Williams: I certainly hope it will draws some attention to the issue of gun violence. That was always in the back of my mind as the play developed over time, but I also know that if events like Sandy Hook or Orlando don’t spark change, I have no illusions that my little play will be the thing that does it. I just hope this play can be part of many small ripples in the move toward progress and when we add them all up it will create a seismic shift in our country. And while every writer dreams that their work will live forever, my dream for this play actually is that it will become outdated. And many years from now people will read it and think, “How quaint. Americans used to argue about gun control!”

HR: Do you think that playwrights and producers have a responsibility to educate their audiences?

Williams: Yes and No. I think playwrights try to shed light on and reflect back to audiences what is happening in the world we all share. Inevitably that may teach people new things about themselves or others, but I don’t think that’s the primary goal of theatre. To me the primary goal is to entertain. We have a responsibility to entertain the audience. Do that first, and any sort of education that comes with it is a bonus. But I can’t personally write something with the idea that it will educate people about some issue. At least I can’t start from that place. I always begin by writing people talking. I put characters in a room, in situations that fascinate me, and just let them start talking and see where it takes me. For whatever reason, I’m at a time in my life where religion, guns and politics fascinate me – so that was the world I created for my characters. 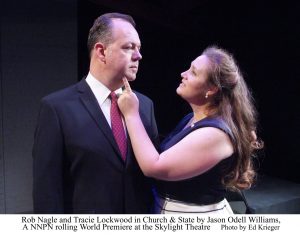 What interests me is a play that gets to the heart of the people around these issues. And when you write about people (not issues) you can’t help but let those people be funny and sad and honest and mean and heartbreaking and uplifting all at the same time. Because isn’t that what being human is? To me, comedy and tragedy are not two ends of a single line, but two points right next to each other on the same circle. So if this play happens to teach you something, great! But mostly I just hope it makes you feel something: joy, sadness, hope, love, passion for change, all mixed up at the same time. Laughter through tears is my favorite emotion so I try to create those moments in my work.

HR: Does Hollywood need to ramp down the violence in film and TV, even in the cartoons for children?

Williams: No. Japan has more violent video games and movies than the U.S., yet they have a fraction of the gun deaths each year, even per capita. I think the issue in America, while complex and rooted in our Wild West nature, is about guns and guns alone. If we could beat the NRA the way we beat Big Tobacco a few years ago, it will go a long way to solving the gun violence epidemic that we have. But Hollywood is the least relevant factor in that equation. 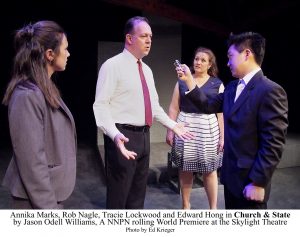 HR: As an EMMY nominated writer and producer, does it give you more freedom to pick your projects?

Williams: I don’t think so. I’m not actually at a stage in my career where I’m picking and choosing projects that people are offering me. I’m not like Aaron Sorkin (yet!) where people are pitching ideas to me or I’m pitching my own ideas to networks and studios. I don’t have an agent or manager submitting me for stuff, I just write what moves me and inspires me and I hope someone comes along who likes it as much as I do and wants to produce it. But I’m out there hitting the pavement so to speak, trying to get people to read my work. An Emmy nomination didn’t really make much of a difference in terms of getting doors opened. It’s still a daily grind. But maybe that’s a good thing. The hustle is good for an artist!

HR: Before working with them, were you aware that Skylight Theatre Company had several development programs for writers?

Williams: No, I didn’t know about that, but I’ve loved my time so far working with Gary Grossman and Elina de Santos and the amazingly talented cast, so I would love to develop more new work with Skylight in the future!

HR: What experience can audiences expect to have from attending this production?

Williams: I hope this play raises questions, sparks debate, while making them laugh and cry and feel moved. Perhaps moved enough to take action, bumping the needle ever so slightly in the conversation about gun violence. But mostly I hope this play speaks to your heart. Because, for me, that’s the only reason to write anything: to speak to each other’s hearts.

HR: Are you developing more work for the theatre now? What types of projects are in the works?

Williams: I don’t have any new plays that I’m currently working on. I’m almost finished writing my second novel, a middle grade book about a kids cooking competition show (like Cupcake Wars, Junior) called BAKE IT TILL YOU MAKE IT. I’m also adapting my first novel, PERSONAL STATEMENT, into a screenplay – it’s about over-achieving high school kids who volunteer for a hurricane relief effort in an attempt to score points on their college applications. My wife and I are writing that together and we also co-wrote a TV pilot about baseball that was a finalist in a script competition that we’re shopping around. But the next big play idea hasn’t come to me yet. I’ve been happily mired in rewrites for CHURCH & STATE, but I think the next theatrical venture I’d like to tackle is writing a musical! I’ve never done it before, I have no idea how to start, it’s kind of scary and I think that’s a good thing.