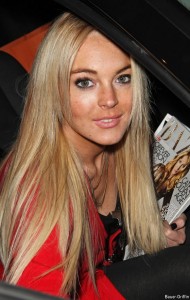 was sentenced to 90 days in jail today for parole violation. Her prison stay will be followed by drug and alcohol rehab.

She was give credit for the 96 hours she spent in jail previously.

The judge allowed her a two week grace period before surrendering to authorities.

Many believe that had she not gone to Cannes, and had returned for her court date, her sentence might have been avoided.

Lohan was in tears as sentence was pronounced.