One of the freshest films to hit cinemas this year is the Marc Webb directed “500 Days of Summer.”

Starring Joseph Gordon Levitt and Zooey Deschanel, the story discects an unpredictable love affair told from the point of view of Levitt’s character, 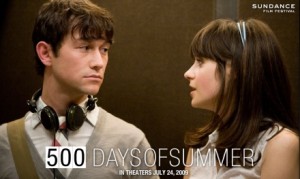 Tom.  Believing in the notion that love is something to cherish and hold on to, his witty, sexy girl, Summer, warns him early in the relationship that she is not looking for anything serious.

Jumping back and forth in time the film chronicles Tom’s 500 day roller coaster ride with Summer, bouncing from his utmost joy to deeply rooted desperation.

Levitt is solid as Tom, delivering a funny, honest performance that makes you want to be his friend. Deschanel is perfect as Summer. Though she’s pretty and smart she is also cynical and distant, making you feel Tom’s pain as you see his heart beat with joy or break because of her indifference.

500 Days of Summer is delightful in it’s hip and stylish approach, it’s emo soundtrack and it’s blend of fantasy and in-your-face reality as we ride along with Tom on his 500 day romance. It’s a little gem of a film that is not to be missed.