“You make Me Physically Ill,” the new play from prolific writer/director, Roger Mathey just might. But in a good way, by laughing too hard at the absurd, oversexed, over-the-top sickos that Mathey has created for this show currently playing at the Elephant Theatre in Hollywood. 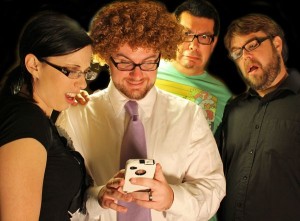 on true events and inspired by a girl Mathey once dated, “You Make Me Physically Ill” makes you want to take the author by the lapels and say find nicer people to hang out with.

“You Make Me Physically Ill” is a play with turrets syndrome. Characters blurt out the first thing on their minds, no matter how off the wall, politically incorrect or jaded it may be. There is incest, racism, homophobia, dry humping and talk of small penises. This is not a PG or a PC production and easily offended audience members are in for a squirmy ride.

Complete with a TV laugh track, Mathey’s story deals with a young man, “Will” (Karl Wade) who accepts an invitation from a pretty young woman, ”Jennifer” (Emily Tisler) to come over for dinner and meet her family. Will soon gets a lot more than he bargain for when Jennifer’s insane, uncensored clan of misfits proceed to unravel and self destruct in front of his very eyes and the night spirals toward its fatalistic conclusion.

The set is impressive and the 80 minute production flies by. But be forewarned. You will need a shower after seeing this show to wash the taint of these fuck-ups out of your system.