It was a full and enthusiastic house at the opening night of the 8th Annual Red Nations Film Festival at the Simon Wiesenthal Plaza in Beverly Hills last night. 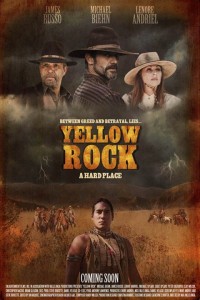 The film was the perfect choice to open this festival. It paints a realistic picture of the plight of native Americans told through a tale that also highlights the greed and callousness of the white men who went in search of California gold in the 19th century. 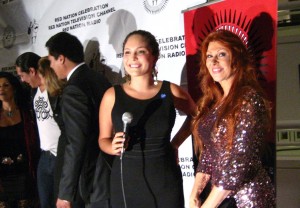 and impressive performance as “Dr. Sarah” a kindly doctor who helps and is trusted by the local Indians. Things take a turn for the worst when a band of rogue cowboys led by “Dietrich” (James Russo) show up and force the doctor to convince the natives to allow them access to Indian land for their own self-serving purposes.

While things don’t end well for the cowboys, the film also leaves us with sadness for the Indian people who, as time would tell, suffered the loss of not only their land but also their dignity.

Ably directed by Nick Vallelonga, “Yellow Rock” features some stand-out performances. Particularly impressive was Eddie Spears as “Angry Wolf,” Michael Biehn as “Tom Hanner” and Christopher Backus in a quiet but compelling turn as “Cobb” that told us more about his character then was ever implied in the story line. Backus’ powerful screen presence drew attention to himself without even trying. He is certainly a young actor to watch.

Lenore Andriel and her producing partner, Steve Doucette are to be commended for this important work. Made on a limited budget it boasts impressive production values, a large and talented cast and a poignant message that resonates. “Yellow Rock” is a film well worth seeing.