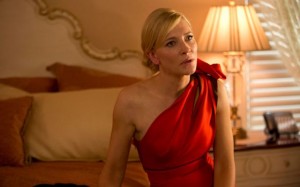 out is cut from the same cloth as Wall Street sociopath, Bernie Madoff.

Jasmine turns a blind eye to her husbands cheating ways and rarely questions his business ethics, preferring to remain silent in order to keep living the lifestyle to which she feels entitled. But all good things come to an end, and when we first meet Jasmine, it is not as the rich woman of means that she once was, but as a broken, desperate soul moving in with her working class sister, Ginger, (Sally Hawkins) a kind-hearted under-achiever who dates an emotional hot head called “Chilli” (Bobby Cannavele).  Ginger and her two noisy sons live in a cramped San Francisco apartment above a store and you can feel the claustrophobia as soon as you enter the premises.  This surely puts our Jasmine out of sorts.

We soon discover that there are some dents in the sister’s relationship.  Ginger and her ex husband, Augie (a surprisingly impressive Andrew Dice Clay) had invested their lottery winnings with Jasmine’s husband, and he lost it all, destroying Augie and Ginger’s one chance to climb out of the gutter.

Jasmine however is unrepentant as she tries to adjust to this major downshift in her life. She unhappily lands a job as receptionist at a dentist’s office, tries to destroy Ginger’s 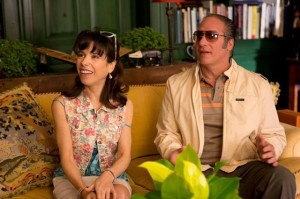 relationship with Chilli, all the while studying to be an interior decorator, a line of work she seems well suited for.  Mostly Jasmine creates havoc, frequently thinking back to what she once was.  It is these flashbacks that allows Blanchette to stretch her talents as both the former and current Jasmine.  We see her at her snootiest as the well-off socialite, throwing dinner parties, indulging in the luxuries that she has mistakenly takes for granted.  We also observe her in present day as she recovers from what seems to be a nervous breakdown, a broke, desperate, humiliated woman trying desperately to hold on to some dignity.

When aspiring congressman, “Dwight” finally comes along, (played by Peter Sarsgaard) Jasmine sees him as her salvation and pulls out all the stops (and all the lies) to be able to get back to the pampered lifestyle that feels entitled to.

Blue Jasmine is an intelligently crafted character study that speaks to the morality of the last decade.  All the performances are exceptional.  Baldwin is at his usual best as “Hal”, and Cannavale is convincing as the rough and tough street hood, “Chilli,” a hood who cries like a baby when his heart breaks.  Hawkins is sympathetic as “Ginger” and Skaarsgard captures wealth and ambition to a T, but it is Blanchette who does the heavy lifting in Blue 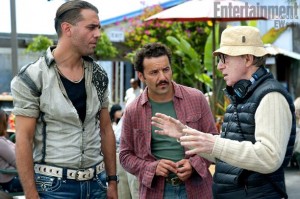 Jasmine and her performance is sure to be remembered come award season.

Beautifully shot by Javier Aguirresarobe, the film is one of Woody Allen’s less kinetic presentations, a welcome film for grown-ups in a summer of comic book fodder, Blue Jasmine is well worth a look. We give BLUE JASMINE **** (four stars).