The National Theatre production of “War Horse” begins performances Thursday, June 14 at 8 p.m. at the Center Theatre Group/Ahmanson Theatre. Performances for the powerful drama will continue through July 29, 2012. Opening is set for June 29. 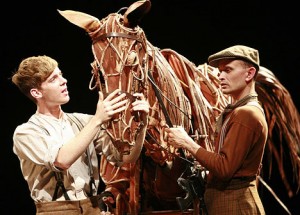 Hailed by The New York Times as “theatrical magic,” “War Horse” is the powerful story of young Albert’s beloved horse, Joey, who has been enlisted to fight for the English in World War I. In a tale the New York Daily News calls “spellbinding, by turns epic and intimate,” Joey is caught in enemy crossfire and ends up serving both sides of the war before landing in no man’s land. Albert, not old enough to enlist, embarks on a treacherous mission to find his horse and bring him home. What follows is a remarkable tale of courage, loyalty and friendship, filled with stirring music and songs and told with the some of the most innovative stagecraft of our time.