Christopher John Francis Boone, the lead character  in Simon Stephens’ Tony-winning adaptation of Mark Haddon’s bestselling novel, The Curious Incident of the Dog in the Night-Time, is anything but your normal 15 year old. Christopher knows that adults “do sex” but bristles at human touch. He’s a genious at math and has a mind that 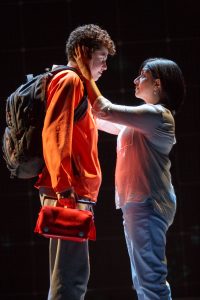 is able to observe and remember minute details, but finds the trials and tribulations of everyday life overwhelming. His condition would seem to be Asperger’s but that is never verbally expressed. All we know is that Christopher sees the world differently. That he is a sharp, likeable young man.

The Curious Incident begins with Christopher finding his neighbor’s dog brutally murdered, killed by a garden fork. Strongly identifying with Sherlock Holmes, our young protagonist sets out to discover the killer’s identity, only to conclude that his own father, Ed, committed the deed. Fearing for his own life, Christopher runs away. Makes what is for him a difficult journey by train from Swindon to London to find and reunites with his mother, Judy. Told by his father that she died of a heart attack, mom clearly feels guilt for having abandoned Christopher and is happy to reignite their relationship. 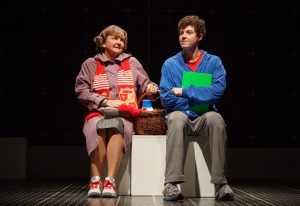 eventually returns to Swindon, aces an important math test and reunites with his dad.

While the stakes here may read as simplistic, The Curious Incident is an intelligently conceived, entertaining theatrical experience, it’s execution nothing short of brilliant.

Marianne Elliott’s direction is imaginative and fluid, making powerful use of what at first appears to be a minimalistic set by Bunny Christie. The stage resembles the inside of a box, but the sound design and video projection by Finn Ross and the lighting design by Paule Constable smoothly transform it, among other things, into streets, escalators and train tracks. The visual and aural aspects play an important part of the show and distract us from any bumps in the story line. 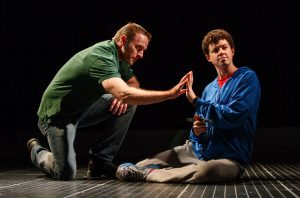 with a highly talented cast. Adam Langdon as Christoper is fully committed in his role. He is agile, confident and likable, with an impressive amount of dialogue that he handles with ease. Langdon allows us a glimpse into Christopher’s soul and he makes us care. In a short scene after the curtain call, Christopher reappears to solve a math problem posed earlier in the show. This last little tag is a clever touch and, incase you were not already convinced, clearly demonstrates the character’s astute intelligence.

Felicity Jones Latta and Gene Gillette as Christopher’s parents and Maria Elena Ramirez as his teacher, who narrates some of the play, are especially strong but the entire ensemble works hard to bring the caper to life.

Winner of 5 Tony awards on Broadway, this touring production of The Curious Incident of the Dog in the Night-Time should not be missed. It is a timely show that compels you to focus, learn and listen as it thoroughly entertains.