When first performed on the London stage in 1964, Joe Orton’s “Entertaining Mr. Sloane” caused much controversy. A twisted story of deception and lust, the play deals with a quartet of complex, unscrupulous characters who selfishly embark on a self serving journey of seduction that, without giving too much away, does not end well. 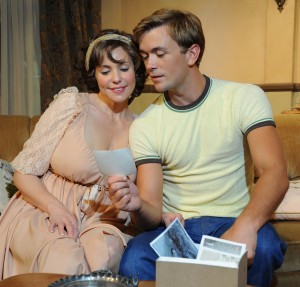 who seeks lodging at the home of Kath, (Olivia d’Abo), a frumpy, middle aged woman who is most happy to have him. Kath’s father, (Robin Gammell) has an immediate distrust of Sloane, suspecting him to have been involved in the murder of his employer some years earlier. Before long, Kath’s older brother, Ed (Ian Buchanan) arrives on the scene and is also smitten with Sloane. The young man is happy to indulge Ed, soon bouncing between Kath’s arms and Ed’s promises, (and perhaps maybe more).

As the twists and turns in the story give us a fly-on-the-wall glance into the lives of these pent up Brits, we are quickly 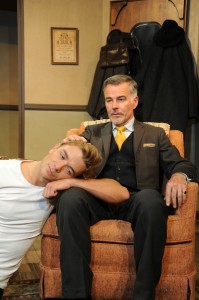 drawn into the psychological drama that unfolds before us. These are unhappy people trying to win regardless of the cost.

Director Stan Zimmerman ably taps into the British sensibility with his fluid direction, though the working class accents chosen for the play are sometimes a distraction. A magnificent set and detailed production design help the play realize it’s full potential. Though first performed forty seven years ago, Mr. Sloane manages to entertain and hold us today as it must have in it’s original incarnation.

Produced by Richard Lutz, this is a production that is well worth the price of admission. A night at the theater that is guaranteed to stay with you for quite some time.

Running Thursdays, Fridays and Saturdays at 8 p.m. and Sundays at 6:30 through July 24 at the Actors Company Theatre located at 916 A N. Formosa Ave. in West Hollywood (free onsite parking). For tickets, go to https://www.plays411.net/newsite/show/play.