A well crafted, finely acted production of THE HEIRESS by Ruth and Augustus Goetz opened tonight at the Pasadena playhouse.  Directed by DÁMASO RODRIGUEZ , the story deals with Catherine Sloper (HEATHER TOM) who stands to inherit a fortune from her ailing physician father (RICHARD CHAMBERLAIN). 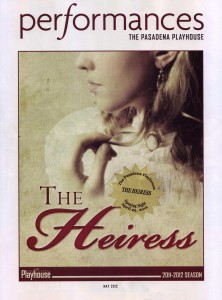 woman, Catherine lives a quiet life under her father’s cold-hearted scrutiny.  Though he says he cares for her, he considers her plain and uninteresting.  Dr. Roper even blames his daughter for the death of his beloved wife who passed away during childbirth.

When an opportunistic young suitor, Morris Townsend, (STEVE COOMBS) comes calling, the good doctor is certain that the penniless young man has proposed marriage in order to get his hands on Catherine’s inheritance.  And this he he won’t stand for.

Catherine is too much in love to pay much attention to her father’s protests.  Though Morris is indeed the first man to ever pay attention to her, she agrees to a cooling off period by joining her father on his up-coming trip to Europe.

After a slightly slow set up the story compellingly comes to a head upon Catherine and the doctor’s return to New York.  Before long the young woman realizes that she is more like her father than she would ever dare admit. From here the production smoothly brings the drama to it’s psychologically nuanced and heartbreaking conclusion with no one ultimately ending up a winner.

Director Rodriguez has done an excellent job here and has managed to find the perfect cast for this play. Chamberlain is powerful as the malevolent doctor who schemes to keep his daughter in line. He is the backbone of the production.

Steve Coombs as Morris Townsend hits all the right notes as the young man whose true intentions are not immediately clear. Even when his cards would seem to be on the table, Morris plays his best hand to hold onto the prize.

JULIA DUFFY is a strong presence as Catherine’s aunt–but it is Heather Tom as Catherine who has the strongest arc in terms of both story and performance.  Starting out as a respectful, soft-spoken introvert, Ms. Tom slowly reveals Catherine’s hidden power and determination as she challenges and eventually outsmarts both the men in her life.

The scenic design by JOHN IACOVELLI deserve a special mention. It is stunning and highly effective. It almost feels like a set from an old Hollywood movie.

THE HEIRESS runs till May 20th.  It is a production that is well worth seeing.