Jon Voight, Ben Stiller, John Landis and Karen and Kat Kramer were just some of the celebrities who attended the premier of “The Boys: The Sherman Brothers’ Story,” which screened at the El Capitan Theater last night. 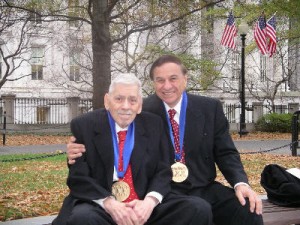 opened with a surprise live solo performance by 80 something Richard Sherman who played a medley of the songwriting duo’s best known songs.

The story of  siblings who wrote some of Hollywood’s most memorable tunes such as “Chim Chim Cher-ee,” “A Spoonful of Sugar,” “Feed the Birds” and “Supercalifragilisticexpialidocious,” as well as number one hits like “You’re Sixteen” for Ringo Starr, is told in  this new compelling documentary from Disney, the studio that was Richard and Robert Sherman’s artistic home for many years.

The feature-length documentary, conceived, produced and directed by Gregory Sherman and Jeffrey Sherman, two of the songwriters’ sons, offers a rare glimpse of two song writing greats at work.

It also explores a deep and longstanding rift that has kept the brothers personally estranged throughout much of their professional career.

The filmmakers, cousins who grew up within blocks of each other in Beverly Hills, never really knew each other.

“There was a ‘keep out’ sign posted over that part of our lives,” stated Gregg, an Emmy Award-winning producer and feature film writer who is the son of Richard Sherman. “My family would see his family at a Sherman Brothers event, but we would never be seated at the same table or near them in the theater. We would acknowledge that they existed, but we had no relationship with them.”

As adults, Gregg and Jeff decided to break that tradition after they connected in 2002 at the London premiere of Chitty Chitty Bang Bang, the stage adaptation of one of their fathers’ most successful films. They decided that by working together, they could pay tribute to their dads.

The result is both informative and emotional.

The picture gets a limited release May 22 in New York City, Los Angeles, San Francisco and Palm Desert, CA.

It is well worth seeing.