Vice-President, Joe Biden raised the question of whether there had been a “coarsening” of American culture in general. “I do not know the answer to that question,” he said, at the final day of effort to develop a new set 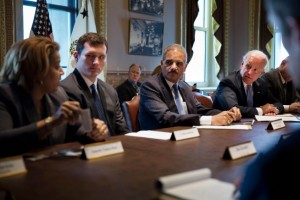 of policies to reduce gun violence and prevent tragedies like the shooting in Newtown, Connecticut.

The chairman of the Senate Commerce Committee, Rockefeller has proposed that the National Academy of Sciences conduct a comprehensive study of the impact of virtual violence in videogames on real-life aggression among children and teens, Rockefeller has been a leading advocate on the issue of media violence, and once proposed that the FCC be given the authority to regulate it in the same way that it polices indecency.

So where is QUENTIN TARANTINO in all this?  Best let it come straight from the horse’s mouth – in answer to Channel 4 News presenter Krishnan 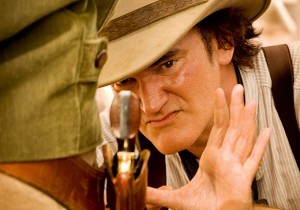 Guru-Murthy’s question, “Why are you so sure there’s no link between enjoying movie violence and enjoying real violence?” the director of “Django Unchained” said… “Don’t ask me a question like that, I’m not biting – I refuse your question!”  Guru-Murthy asked, “Why?”  The master of blood-spill said, “Because I refuse your question!  I’m not your slave, and you’re not my master!  I’m shutting your butt down.”

And so the link between fantasy and reality got a shade greyer and Tarantino rambled on that, “ You’re not going to make me dance to your tune, I’m not a monkey, because I’m here to sell my movie – this is a commercial for the movie, make no mistake, and you know where I stand in it.”  “That there is not a relationship!” clarified Guru-Murthy.  “Yes,” answered Tarantino.

Guru-Murthy asked the might-be Oscar winner the question he started with, “Why do you think there is no relationship?”  And the man who would be nobody’s slave declared, “IT”S NONE OF YOUR DAMN BUSINESS WHAT I THINK ABOUT THAT!”

The interview was steered back to a less turbulent note by the calm, and possibly amused, Guru-Murthy, but Tarantino had revealed his shallow understanding of human nature, culture and the arts.