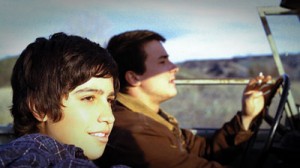 with Ted, a teenage boy who begins to see the older brother he has always idolized in a different light.  Ted realizes he must choose between following in his brother’s lost footsteps or try to find his own way in the world.

Lorenzo James Henrie and Alex Frost give fine, nuanced performances as the two brother. Portia Doubleday is excellent as the pregnant but maligned girlfriend whose betrayal by Frost’s character sets a chain of unfortunate events in motion.