The Academy of Motion Picture Arts and Sciences has banned actor Sacha Baron Cohen from attending Sunday’s Oscars even though he is an Academy member and one of the stars of Hugo, Paramount’s 11-nominated movie and Best Picture contender. The 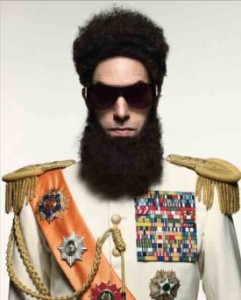 reason given is that word reached the Academy suggesting that Baron Cohen planned to walk the Red Carpet in full costume as his title character in the upcoming Paramount comedy The Dictator.

According to Nikki Fink of the website, “Deadline Hollywood,” The Academy’s Managing Director Of Membership Kimberly Rouch phoned Paramont’s awards staff to say Baron Cohen’s tickets had been pulled unless he gives the Academy assurances ahead of time promising not to show up on the Red Carpet in costume and not to promote the movie on the Red Carpet. The Academy made it clear that, without those assurances, it would not issue him the tickets.

Sasha Baron Cohen is one of the funniest actors around. If he dons a beard or a costume to walk the red carpet at an event the is clearly designed to promote product we would find it a welcome treat. So very tired of the boring, gushing, salivating that goes on prior to award shows on red carpets. Mr. Cohen’s answer to “who are you wearing” would be the only one we would want to hear. Let him go the awards and do what the Oscars were designed to do. Promote movies.