“Nick and Norah’s Infinite Playlist”, the long-time coming follow-up from Raising Victor Vargas director Peter Sollett is a well meaning film that loses it’s way.  Michael Cera plays Nick, an Emo musician trying to get over his break-up with Tris, played by an on-the-money Alexis Dziena.  After a gig with his band, “The Jerk Off’s” Nick meets Norah, (Kat Dennings) a pretty  Emo girl we are supposed to believe has no luck with the opposite sex.  Thrown together in their hunt for a secret appearance by their favorite rock band, “Where’s Fluffy,” Nick and Norah soon realize how much they have in common. After a few bumps in the road, a new relationship is born. 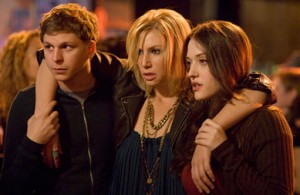 Some convoluted plot points involve Norah’s drunk friend, a couple of gay band-mates of Nick’s, and Norah’s obnoxious on again, off again boyfriend, who is clearly using Norah for her father’s connections in the music business.

Nick and Norah follows a familiar pattern stated by films such as “Juno” and “Superbad,” also borrowing liberally from the Martin Scorsese film, “After Hours,” giving us a loving look at Manhattan’s late night venues.

The biggest problem with this film is that nothing much happens. Cera floats through the film as the same passive kid with met in “Juno,” and while he is likable, ninety minutes of his soft, introverted personality is enough to make you wanna shake the guy and tell him to wake up.  Dennings, whose performance is pretty good here is more interesting, but it is not enough to save the movie.

The great soundtack featuring some cool music you’ve never heard might be worth the price of admission, but over all, “Nick and Norah’s Infitinte Playlist” is a disappointent.