Wickedly clever writing, a brilliantly funny cast, and a director that knows how to milk a joke combine to make RE-ANIMATOR: THE MUSICAL a gut-bustingly hysterical piece of theater.

I found myself at the Steve Allen Theatre knowing very little about Re-Animator. I imagined I was going to be sitting down for some sort of silly, campy Frankenstein spoof. But, what awaited me inside was an entirely different 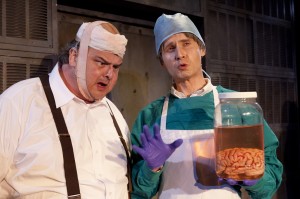 Everyone in the first three rows of the audience were wearing lab coats. And some had goggles on. “Are they part of the show?” I wondered. It was only after they announced that the first three rows were the designated “Splash Zone”, and a friendly usher offered me some black-and-orange pom poms (which I accepted enthusiastically), that I understood what was happening. I wasn’t seeing a musical. I was seeing a CULT musical.

The lights dimmed, the overture played, and within moments a zombie was spraying blood all over the audience with eyes dangling out of their sockets, all the while clapping and doing a jaunty dance.

Now, at first blush, this could seem rather cheap or gimmicky. But, Re-Animator is filled to the brim with such gags and jokes, somewhat like a comedic sausage. 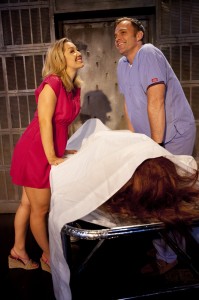 And outlandish, dirty, or zombified as they may be, they are all delivered with a wit and abandon that make the show a constant delight.

A tremendous tip of the hat to Stuart Gordon, who directed the play and also co-wrote the book with Dennis Paoli and William J. Norris, for developing a show that hits so many dark, irreverent places in such a charming and light-hearted way.

Re-Animator: The Musical follows the dark mission of Herbert West, a genius medical student who developed “Re-Animator”, a glowing green serum that can bring the dead back to life… as Zombies! But Herbert believes the whole “zombie” thing to be due to the corpses not being “fresh enough”, or because he got the dosage wrong. What ensues during his quest for immortality is a tale of love, murder, and hilarity.

Graham Skipper’s portrayal of West is magnetic. You just want him to keep coming on stage! The man is a narcissistic egomaniac with a messiah complex – I mean West, of course. He will do anything to perfect Re-Animator and free the world from “Death”. Skipper controls the stage with a manic, wide-eyed intensity balanced by the tantrums and poutiness of a spoiled child. A simmering energy fills his every movement and quip, and infuses his moments on stage with presence and humor. And beyond that, only 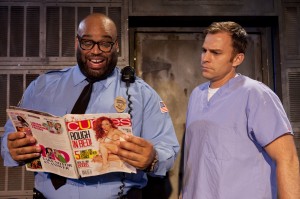 someone with impeccable comedic timing like Skipper could make the line “I thought I rented a private room” a laugh riot.

Dr. Carl Hill, played by Jesse Merlin, is Herbert West’s archenemy – a lecherous professor with an eye for the dean’s daughter. First off, Merlin’s operatic vocal quality and bone-dry performance compliment the comedic lyricism of the score beautifully. While delivering a macabre, perverted toast to the dean’s daughter, Merlin’s flair for nuance peppers the purposefully dirge-like song with subtle body language that kept the room bubbling with laughter.  And I haven’t even mentioned the fact that he does nearly half of the show decapitated! That’s right, Dr. Hill gets his head cut off. But, due to “Re-Animator”, comes back to life, with his bloody head in his hands… and still singing.

Dan Cain, played by Darren Ritchie, is a dashing, hopeful 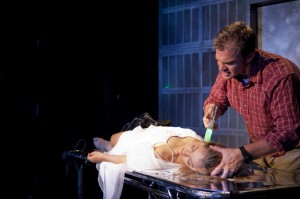 medical student engaged to the dean’s beautiful daughter, Megan Halsey, played by Jessica Howell. These characters serve the critical purpose of acting as a counterweight to the off-the-wall antics of the rest of the cast. But, both actors certainly bring their comic chops to the table and shine themselves. Ritchie’s light tenor and earnest performance make him a likable, strong, and (even more importantly) funny romantic lead. Howell with her ability to be simultaneously smoldering and girlishly innocent make her a very empathetic heroine. She brings an energy to the stage that is bright and engaging.

In many ways, Re-Animator is really an operetta in disguise. The piece is almost entirely sung, with the dialogue coming in mere smatterings between numbers. But, this only serves to make Mark Nutter’s score that much more impressive. The lyrics are sharp and clever with a musicality that is true Broadway, all of it wrapped in a twisted story of undead mayhem. But, even more impressive, is the insightful nature of 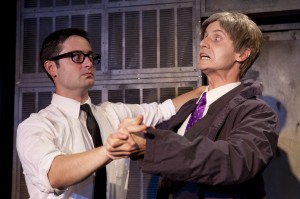 some of the music, most notable captured when Dan and Megan sing about their future wedding. She wants a lavish, planned affair, and he wants to be spontaneous. And, as the show moves on, they reprise the number, but with their opinions reversed. What was once a battle-of-the-sexes joke number transforms into one that delicately reveals the hearts of the characters, and how their relationship has transformed so completely.

There is one section of the show, however, that falls a little flat compared to the rest of the piece. Mace, the security guard at the morgue, played by Marlon Grace, is a lazy wage slave eager to do anything but work. He sings a soulful up-tempo number about how much he loves his simple job, and this number is reprised several times. The musical phrases are long and open, seemingly intended for some mild vocal pyrotechnics, but none ever make an appearance. And the jokes, though amusing, don’t land quite as hard as those throughout the rest of the piece. There is a sharpness lacking here, whereas everything else in the show is so crisp, balls-to-the-walls, and specific. It just doesn’t hit 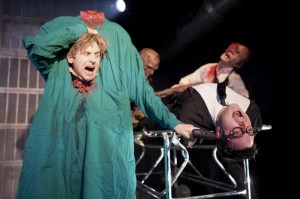 The ensemble consisting of Brian Gillespie, Cynthia Carle, and Liesel Hanson is very strong, and every person has their shining moments. Their undying commitment to the seriousness of this ridiculous story, the unique character choices they make, and their cohesiveness as a semi-Greek Chorus keep the laughs rolling and the momentum moving. Ken Hudson Campbell’s depiction of Dean Halsey is warm and likable, like a teddy bear. That is until he turns into a zombie. Then it gets a bit more… colorful.

The set, imagined by Laura Fine Hawkes, consists of a steel door mounted on metallic bars – cold, utilitarian, and mysterious. The lights designed by Jeff Ravitz shine through slits in the set, setting the mood with an eerie ambience. The overall effect creates a play area that is versatile and simple.

Joe Kucharski’s costume design for Re-Animator is simply outstanding. Zombies in various forms of decay appear throughout the show, with entrails dangling and blood squirting. Often the actors would wear masks or prosthetic makeup to depict hideous wounds. But, the pièce de résistance is a life-size dancing zombie cat that swings its exposed intestine around like a cane… all for just 10 seconds of stage time! So much detail was put into that costume for such a brief appearance! For them to commit so completely to such a little sight gag is yet another example of the spirit of theatre-craft that makes this show works so well.

And the blood. So much blood. Props to Tony Doublin, John Naulin, and John Beuchler who designed the special effects. Little magic tricks are interspersed throughout the show, particularly with the transforming of a dead person into a zombie. They are done so cleverly that every potentially awkward transition is achieved in a smooth, graceful manner instead. And, of course, they made an intestine that blasts blood into the audience while Herbert West sings a twisted spoof of “My Way.”

There was so much about Re-Animator that reminded me of the experience of going to The Rocky Horror Picture Show. The diehard fans clearly knew all the lyrics – often laughing before the joke even arrived. People snapped pencils on cue with actors onstage. And, I waved my pom poms with the rest of the crowd during a random school fight song. The only difference is that, unlike at Rocky Horror, the audience at Re-Animator was glued to every word of the show – not calling back to the performers onstage. But the passion and enthusiasm in the room was simply undeniable.  People love this show.

If you have a sense of humor and want to have an off-beat, laugh-out-loud theater-going experience, then you need to go see Re-Animator: The Musical. It’s one you’ll remember.

Based on H.P. Lovecraft’s “Re-Animator”