Sacha Baron Cohen’s new movie Bruno, about an outrageous gay fashion correspondent hoping to make it big in Hollywood, has nailed another celebrity 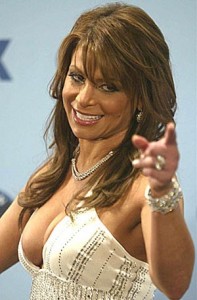 According to the New York Post, “Paula was totally fooled.”

Abdul called into a radio station this morning to explain what happened and why her blundering publicist got her in front of Bruno’s German camera crew in the first place.

Here is her explaination:

It is the most interesting, whacked-out situation that happened to   me. I was scarred for life for a year. A year ago, my publicist said I’d won “Artist of the Year” in Germany. And I said, “Really? That’s interesting. Okay … ” They said they were going to film a Johnny Depp one for film, and a Scorsese one, I think …

It was on a day of Idol, so I could do it in the morning. It was in the Hollywood Hills. So I get there, and it’s this German crew. And I never signed a release, but I guess my publicist did. And I walk into the home and I’m greeted by this futuristic Captain Nemo–looking dude with a mohawk — and he’s flaming. And I’m going, “Oh, this is going to be one of those fun Japanese game shows.” I’m like, okay, this is weird. Is this a variety show or something like that? So I walk in and there was no furniture except for a chair. And I’m waiting and waiting. And this guy Brüno introduces himself and I said, “Hi.” And he said, “Here have some food.” And the food looked horrible. And I said “No, I’m fine.” And he said, “It’s very, very, very good.” I said, “That’s okay, I don’t want to have it.”

And I’m in a dress, so I’m tipping and holding my core muscles to not sit on them. And he pushes me down on them, and I’m like, “I’m sorry. And these two gardeners … Mexican gardeners don’t speak a word of English, and I’m like patting them and I’m like, “I’m so sorry.” And he kicked one of them, and we all fall. It was getting so uncomfortable and I’m throwing daggers with my eyes at my publicist. And they’re kicking my publicist out. And I said, “Get me out of here. This is crazy. This is not funny, this is discrimination. This is abusive stuff going on here.” And he says, “I need you to change your clothes,” and I said, “No, I won’t be doing that. I have to go to work … And by the way, where’s my award?”

I had to go to Idol and I couldn’t wait to get out of there. And as I’m going to my car, they’re chasing me with cameras, and I’m like, oh God this is so awkward. And I’m trying to hold a smile on my face and the guy Brüno’s running down the street in front of the car. It was hysterical but it was so disturbing. I was so mad at my publicist at that point. I said, “I can’t believe you signed [the release].” And my manager and attorney were trying to call the production office — and of course it doesn’t exist. So I was freaking out.

So a year goes by. And three weeks ago, my manager sends over something. He says “I have no idea what this is … ” People magazine wants to know how it feels to be totally punked by Sacha Baron Cohen, a.k.a. Brüno. And I said, “I’ve never done anything with Sacha Cohen … They’re wrong.” So we respond — “We have no idea what this is, but she’s never worked with Sacha Baron Cohen.” And at two o’clock in the morning that night I woke up in a cold sweat. I popped my body up out of bed and I went “Holy crap! Oh my God!” And that’s what happened. And I’m dying.

Bruno is to be released in July.