L.A.’s largest apartment complex — PARK LA BREA, home to many Los Angeles entertainment types,  is infested with bed bugs, as well as rats, roaches and other vermin.  Residents say that it’s a problem that has been going on for years, and they now want action. 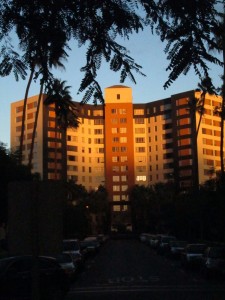 who live at Park La Brea, who all have similar stories.

“The first time I noticed a roach was about a month into me moving in, and then September of this year is when the bed bugs started,” resident “Tina” told KTLA.  “Then they come in and they exterminate, but three weeks later you have the bugs again,” she said.

“They make you pack everything up like you’re moving, and the problems still wouldn’t go away,” a second resident, who we’re calling “Michael,” echoed.

A third resident described opening her kitchen cabinets and finding small, dead roaches. She says that even after a fumigation, the roaches came back.

The complex, made up of several 12-story buildings, has more than 4,000 apartment units.

Park La Brea’s website says the units are freshly upgraded and offer a tranquil retreat at the center of Los Angeles.  “They sell you a dream, but you wake up to a nightmare,” “Tina” said.

She posted flyers in several buildings asking anyone who shared her roach and bed bug problem to gather for a meeting.

“Do you know how many emails I got immediately? I got like 12 emails immediately,” she said.

The group is now considering a class-action lawsuit.

But, they feel that they can’t move out because they’ve signed strict 12- to 14-month leases that automatically renew and make it financially difficult to leave.

KTLA contacted the Prime Group, the company that manages the units, but did not get a response.

The L.A. County Health Department is now investigating the case.