With the Leonardo DiCaprio, Russell Crowe film, “Body of Lies” coming in third this past weekend in the box-office derby, L.A. Times columnist Patrick Goldstein asks whether audiences are burning out on movie stars, especially ones that command those huge salaries. 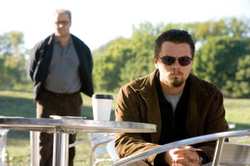 “Body of Lies” finished No. 3 — behind “Beverly Hills Chihuahua,” a Disney talking dog movie, and “Quarantine,” an anonymous low-budget thriller from Screen Gems — grossing only a paltry $13.1 million.

Goldstein goes on to say that “no one is going to end its love affair with movie stars. In a business built far more on perception than reality, they are the grease that keeps the wheels spinning, the straw that stirs the drink. But after openings like “Body of Lies” had this past weekend, it’s time for a market correction.

The value of movie stars is a lot like most entertainment stocks today–it’s in serious decline.”