The Los Angeles County Sheriff’s Department announced that actor Michael Madsen was arrested after getting into a fight with his teenage son Friday. 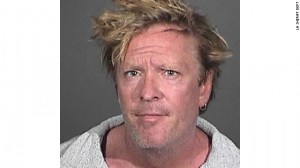 arrested Friday afternoon after deputies were called to his Malibu home, according to a sheriff’s department statement.

“Madsen appeared under the influence of alcohol and got into a physical altercation with his teenage son,” the statement said.

The teen whose name and age were not announced did not need medical attention.

Madsen, who starred in the movie “Kill Bill” and frequently acts in dozens of low budget film faces a charge of cruelty to a child. Bail was set at $100,000.

Update:
Madsen’s attorney, Perry Wander, tells TMZ that “[Michael] found his son smoking pot and they got in an argument when he tried to take it away.  It’s a family matter and Michael asks that his families privacy be respected.”