5:00 p.m. and the show has just started.    Nicole Kidman presenting the first nomination, Outstanding Actor in a Supporting Role. 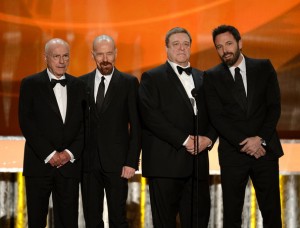 The winner is: Tommy Lee Jones, who is not there to accept.  Disappointing choice for this award.  It should have gone to Arkin or Seymour Hoffman… but them’s the breaks.

5:09:  Justin Timberlake looking very conservative giving out the award for Outstanding Performance by a Female Actor in a Supporting Role.  Nominees are:

The Actor goes to Ann Hathaway who gives a sweet sincere speech.

Will it be Betty White?

No.  The winner is: Tina Fay, looking very 1940s, receiving her 5th Actor award.  “Thank you for letting me in this union,” she tells the audience.

Next is the cast of Argo, introducing their film.

Amazing how these same shows dominate every award show.  And the Actor goes to: The cast of Modern Family, winning for the third consecutive win.  Boring.  Surely there are some other worthy show out there?

The award goes to Julianne Moore for “Game Change.”

The winner is: Kevin Costner who also won the Golden Globe.  He is not there to receive the award.

6:05 p.m. Alec Baldwin pays tribute to Dick Van Dyke who is getting a Life Achievement Award.  He gives a sweet, funny thank you speech.  “Aren’t we lucky to have found a line of work that doesn’t require growing up,” Van Dyke said in a speech that paused to recognize co-stars like Mary Tyler Moore and to poke fun at his iffy Cockney accent in “Mary Poppins.”

Brian Cranston wins for “Breaking Bad.”   “It’s good to be bad” he declares.

The award goes to new mom, Clare Danes for Homeland who seems to be winning everything these days.

In something of a surprise, the award goes to the cast of Downton Abbey.  “We are so not expecting this.  Shut the French windows” one of the actresses from the show exclaims.

The winner is Jennifer Lawrence who wins a SAG award for the first time.  In an emotional speech she begins by thanking MTV for earning her SAG card at the age of 14.

And the Actor goes to: Daniel Day Lewis for “Lincoln” who gives a lovely, mannered speech, pointing out that it was an actor who murdered Abe Lincoln, and it’s appropriate that once in a while an actor brings him back to life again.

And the final award, presented by Jude Law:

And the award goes to the well deserved “Argo.”  Ben Affleck accepts in a humble speech, thanking all actors everywhere.  And there it is.  Another SAG award show over and done with.  It was fast paced with few surprises, but enjoyable non the less.

And now on to the party.