Lindsay Lohan’s comeback as host of last night’s Saturday Night Live proved to be something of a disappointment.  A number of fans and critics alike have panned her performance.  On the show Lohan seemed nervous 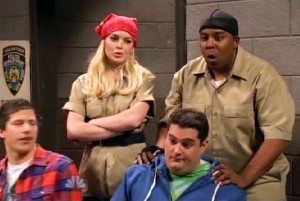 and unprepared, reading most of her dialogue from cue card which she fumbled on several occasion.  The Los Angeles Times story re her hosting skills summed up consensus with the headline: Fans Rip Hosting Job.

Still we have some sympathy for Ms. Lohan.  It is not an easy task to perform live on television in front of millions of people especially with the less than stellar comedic material which was handed to her.  Lohan clearly felt the pressure and it was obvious that at times the task was slightly overwhelming for her.  Perhaps we should take her at her word when she says she is trying to get her life back on track and cut her some slack.  Not jump all over her as navigates the road back to respectability.   She is a talented actress and like everyone, she deserves a second chance.