Lindsay Lohan has posted a topless photo of herself on Twitter. This comes after reports have surfaced suggesting Lohan may have pocketed $400,000 worth of Dior jewelry during an Elle Magazine photo shoot. Lohan was 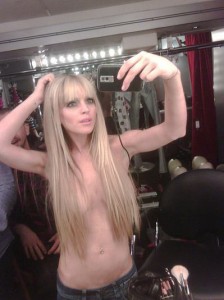 seen handling the jewels and repeatedly talked about keeping them.

A police spokeswoman told People Magazine, “Westminster Police are investigating an allegation of theft of jewelry from studios in Brewery Road in Islington. The theft was reported to a central London police station on the eighth of June after earrings and a necklace, believed to be diamond and estimated to be worth $400,000, were found to be missing approximately two days earlier.”

She adds: “Inquiries are continuing and no arrests have been made. As far as who we will be interviewing – we will be speaking to a number of people in connection with the inquiry and don’t discuss the identity of the people we are planning to interview.”

Meanwhile, a spokeswoman for Elle U.K. released a statement exonerating the 22-year-old star. “I can confirm on behalf of Elle magazine, that items of jewelry went missing from an Elle photoshoot … and the matter is now being investigated by the police,” she states. “Elle has no reason to believe that Lindsay Lohan was in any way responsible and has no further comment to make.”

There has been no investigation as to why Lohan posted the topless photo on Twitter.