Alright, let’s talk about the elephant in the room. Yes, this movie came out almost two weeks ago but give me a break; I do have a life outside of this website. 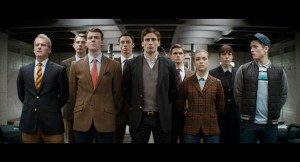 Mark Strong, Samuel L. Jackson, and Sofia Boutella. Based off the comic from Icon Comics written by Mark Millar, it tells the story of Gary ‘Eggsy’ Urwin (played by Egerton) who’s recruited by Harry Hart/Galahad (played by Firth) into the secret spy world to battle terrorism of all types wherever they may lie and save the day, in the most stylish fashion.

Now the formal shit is done, let’s really talk about the movie. This one is fun, fun, fun. Fuck proper grammar because that’s how good this movie is. It’s not a deep thinker or dumb down explosion fest. It’s a stylish action spy film that deserves your smile and hard earned money. But, I’m getting ahead of myself.

The movie starts off by letting you know how cool 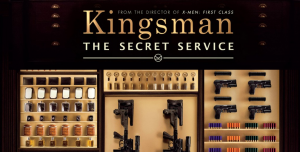 everything is going to be in almost every scene but doesn’t stick its pretentious nose at you. When Eggsy is picked from the slums of England because of his family history, he, along with a few other candidates, are molded and trained into proper gentlemen spies by Merlin (played by Strong), while Galahad and other fellow Kingsmen investigate the disappearance of Professor Arnold (played by Mark Hamill…yes, you read that right). This leads to a trail to tech billionaire Valentine (Jackson) and his bad muthafuckin’ ass henchwoman, Gazelle (Boutella). Now, doesn’t that just scream nefarious plans for world dominating?

You can tell that everyone involved with this movie had a blast making it. There is plenty of dry 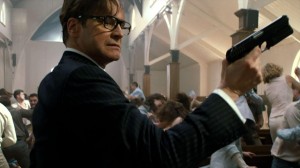 British humor that mixed well with American. You’ve probably heard that this movie is a blend of Vaughn’s early film Kick-Ass and James Bond, spot on. Kingsman takes the spy genre and brings it to a real world yet still comical place. The movie even pokes fun at itself by mentioning how it follows the tropes of a hip spy film.

The direction of Matthew Vaughn is so damn good. There are a few shaky cam-esq scenes that begin a little jarring but are quickly forgiven when it really brings you into the action. It’s been reported that Vaughn passed on X-Men: Days of Future Past to make this film and thank god he did. I don’t think anyone could’ve fit as director better than him for this type of story. No shot 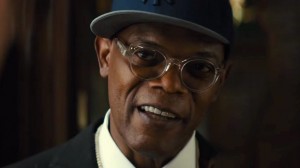 is wasted and Vaughn makes sure everyone hits their comedic mark.

The action is awesome. There is a great scene when Colin Firth’s character goes full Jason Bourne/Bryan Mills and takes out a room full of people to the tune of Lynyrd Skynyrd’s ‘Free Bird’ and with the flair of, you guessed it, Kick-Ass. I caught myself having the hugest grin because it was just that cool. This being a spy film, of course you’ll get your fill of handy dandy spy gadgets; even making a few cracks at some classic Bond tools.

This movie is a fun spy/action ride that I think you will want to go back again and again. It won’t win for the most thought provoking concerns on our society, but will do its job as this year’s first great action film. All in all, enjoy this film. Trust me, I am a trained professional.